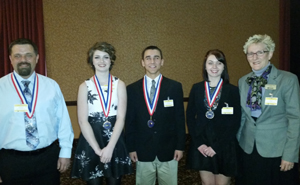 The students were among 56 Kansas community college students honored Feb. 11 in Topeka as part of the 21st annual Kansas All-State Academic Team luncheon. The event was attended by community college, university, and Kansas Board of Regents representatives as well as Kansas legislators. The event, co-sponsored by the Phi Theta Kappa International Honor Society and the Kansas Association of Community College Trustees, annually recognizes top students from the state’s community colleges.

Those honored were presented an educational scholarship of $300, an academic medallion, and a certificate signed by Kansas Governor Sam Brownback. In addition, a minimum $1,000 scholarship will be provided to All-Kansas Team recipients who transfer to Kansas Board of Regents universities, Washburn University or a Kansas Independent College.

Each scholar is now nominated for the 2016 All-USA Community College Academic Team, sponsored by USA Today, Phi Theta Kappa and the Follett Higher Education Group. First-team members will receive a $2,500 stipend and will be featured along with second- and third-team members in USA Today. Team members are also presented with medallions. Names of the students will be placed on the society's website, www.ptk.org.

Phi Theta Kappa is the honor society for students attending two-year community colleges. Membership is based on high grade point averages and other criteria, with members focusing on scholastic achievement and service to community and campus. This year’s 56 scholars are part of a statewide student body of more than 132,500 students enrolled at the 19 Kansas community colleges. Each scholar was selected by his or her own community college for the annual statewide academic team.

More about Butler’s Kansas All-State Academic Team members:
Cassidy O’Neill of Derby is majoring in Applied Science. She plans to seek a bachelor’s degree in psychology from the University of North Texas. She is a student of Butler’s Early College health Sciences Academy in Rose Hill and is scheduled to graduate from Butler this May, prior to receiving her high school diploma from Douglass High School. She is a high school senior serving as vice president of the Douglass High School student body and of the National Honor Society chapter. She is a member of SADD, KAY, and Spirit Club.

Logan Browne of Bowling Green, Ohio is majoring in agribusiness. He is a member of Butler’s nationally-known Livestock Judging Team and is a member of Butler’s Ag Ambassadors student group. He also serves as treasurer of the Butler’s new Young Farmers and Ranchers club. He also concluded an internship with World Changers which allowed him to travel to Jamaica four different times on agricultural mission trips where he helped start two farms for high school students in the rural village of Hopewell.

Katlin Jurging of Douglass is majoring in pre-medicine and plans to continue at Pittsburg State University with the goal to ultimately becoming a physician’s assistant. She is a volunteer at Rainbow Meadows Equine Rescue and Retirement, and is a Kansas State High School Activities Association (KSHSAA) official for volleyball and softball for middle school and subj-varsity levels.

Jason McKenzie of Andover is majoring in Software Development. He plans to continue his education to become a data scientist. He volunteers with the Kansas Food Bank’s Food 4 Kids Backpack Program and donates blood to the American Red Cross. McKenzie is a US Army veteran who served 10-years in the armed forces which included one-year in Kuwait. He has a wife and daughter and works full-time with Protection One Security Solutions.