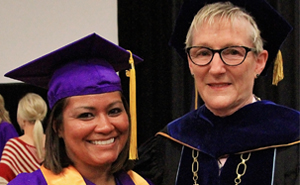 Dr. Lynn Tincher-Ladner is pretty sure she has the greatest job on the planet.

Earlier this year she became President and CEO of Phi Theta Kappa, the largest and oldest honor society for two-year students, and her first commencement speech was to the graduates of Butler Community College.

“There are no honor society emergencies,” she said. “And I get to hand out awards and scholarships for a living. So beat that.”

That drew some laughter and got the attention of most everyone at the 89th commencement at Butler, which included friends and family of the 1,448 graduates receiving a two-year degree or certificate. Graduates from Fall 2015, Spring 2016 and applicants for for Summer 2016 were all honored.

Along with a Ph. D. in Education Leadership from Mississippi State University, Tincher-Ladner’s background is mathematics. So, she shared some numbers of the graduating class, who had accumulated more than 50,000 credit hours. And, weighing the cost of those hours against those of a public university in Kansas, this year’s Butler graduates saved a combined $8.6 million — a conservative estimate, she added.

“So congratulations on making not only the right choice, but the smartest choice you could,” she said. “The courses, the programs, the studies, the curriculum… are just as rigorous as any other four-year school or university in the entire country.

“Your degrees have value, and you need to remember that.”

Another group of recognized individuals were members of the Phi Theta Kappa Honor Society, who were distinguished with a yellow stole.

In addition to Tincher-Ladner’s commencement address and the recognition of the Order of the Gold recipients, the ceremony included the announcement of this year’s Hubbard Award of Excellence recipient. The honor, which was first created in 1985 by alumnus R.D. Hubbard in order to recognize and encourage academic excellence, was given to Amy Winter of Wichita.

Winter will receive a $14,000 transfer scholarship to continue pursuing her bachelor’s degree in Business at Wichita State University. Winter was selected out of more than 40 applicants by a committee of college administrators, Butler Foundation Board President Jeremy Sundgren, and an R.D. and Joan Dale Hubbard Foundation representative.