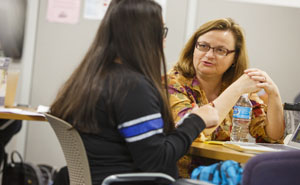 At registration, his advisor told him he needed to take developmental English. He was upset. Bonham knew this class would put him behind schedule.

“I didn’t believe I needed to take it,” he said. “I got in the mindset that it was stupid.”

Bonham and his advisor found a compromise. Instead of taking the traditional developmental course first semester and then Composition 1 second semester, he chose to enroll in the Accelerated Learning Program (ALP) model. This model places students in both the developmental course and Composition 1 during the same semester. This way, the student does not fall behind. Butler has piloted this course sequence since 2013.

“Once I started, I was amazed at how great it was,” Bonham said. “We were like a secret club that the other class did not know about.”

“This class made it easier to talk with the teacher,” Bonham said. “I was more able to express myself openly, rather than hide behind a pencil.”

Having taken the ALP sequence, Bonham felt prepared for Composition 2 during spring semester. In addition to helping him with his writing, the ALP class provided this Goddard native with a focus. Bonham wants to earn a degree in English, and then head to Beijing and teach. He said the ALP class not only helped him with writing and grammar, but it gave him insight.

English Professor Cory Teubner, who taught Bonham, said the students who take ALP are markedly more engaged than those who take the developmental English class one semester and then Composition 1 the next.

“Historically, the developmental students have felt marginalized,” Teubner said. “It was disheartening for students and not very interesting.”

That doesn’t have to be the case anymore, as noted in the February 2016 national report, Expectations Meet Reality: The Underprepared Student and Community Colleges, prepared by the Center for Community College Student Engagement (CCCSE). This study, which listed “improving college completion” as the number one priority, highlighted Butler Community College’s ALP initiative as an example of success for addressing developmental English skills among incoming students.

Beginning this fall, and based on the compounding success of the program, Butler will enact a full-scale implementation of ALP across all six of its campuses as well as online.

“It is exciting to see what students and faculty can do working in this model,” said Lori Winningham, Butler’s vice president of Academics. “It is clearly a model that is focused on student success.”

ALP, which originated at Community College of Baltimore County, is also being implemented in Kansas at Salina Area Technical College and Cowley Community College, and more than 200 community colleges nationwide. At least five states have adopted the curriculum: Arkansas, Colorado, Connecticut, Indiana, Michigan and Virginia.

“We are seeing a continuous improvement,” said Kathy McCoskey, Lead instructor of Developmental English at Butler. “This program causes students to rise to the occasion.”

Although taking both English courses during the same semester is challenging, the ALP students are given support in their specially-designed course. In addition to critical thinking, the ALP students are instructed and coached in college-level reading, writing and research. Although the assignments in the developmental course are unique to that course, they are designed to support what the student is learning in the composition class.

An added bonus for both the school and the student is increased retention and graduation rates.

“The learning is student driven,” Teubner said. “We give students truly difficult readings from a variety of disciplines and support their work with appropriate teaching strategies.”

Dean of Humanities and Social Sciences, Susan Bradley, Ph.D., was so impressed with the results of this program, she decided to adopt it school wide this fall.

“Developmental student success is very important to us,” Bradley said. “And, we’re seeing dramatically increased success rates with those students when they take our ALP courses.”

Although many students baulk at taking the developmental class along with Composition 1, most are witnesses to the benefits once they’re over.

“The class really prepared me,” said Heidi Wiswell of Valley Center. “This course gave me that extra push.”

“I really like English,” Wiswell said. “I was considering majoring in it before this class, but after this class, I officially chose it.”

Like Bonham, Wiswell bonded with her ALP classmates and professor. And similar to Bonham, after completing the course, she is glad that she took this two-class sequence.

“The class was both a nice fresh reminder and challenging,” Wiswell said. “We got to keep analyzing what we were reading. It was like having an extra hour of understanding.”