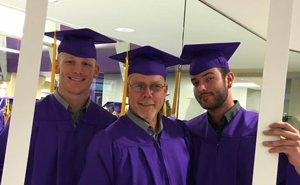 Chris Rinke and his two sons graduated with their associate's degrees in applied science alongside one another.

When Lucas Rinke signed up to go to college for sheet metal work, he knew he wouldn’t be alone. Not only was his older brother going to be by his side, but his dad decided to join him as well.

“I didn’t have to go through it alone,” Lucas said. “It’s nice to have someone to compete with in a fun way. It also forces you to do your best.”

Lucas, 22, and his older brother Nick, 25, are graduates of Clearwater High School. Both brothers are proud to follow in both their father’s and grandfather’s profession – working with sheet metal. The boys’ grandfather had started like them, in welding and manufacturing at Central Air Conditioning. Frank Rinke worked his way up the company ladder and eventually became a partner. Their father, Chris Rinke, had worked his way up as well. He is a manager with the company, now called Central Consolidated.

Chris knew, at some point, one of his boys was going to enter the business. In addition, he had always wanted his associate’s degree, but was intimidated by the coursework. He had completed his apprenticeship, which is a part of the degree, decades earlier.

The three Rinke men decided to enroll in Butler Community College’s Sheet Metal Apprenticeship Program, which serves in a partnership with Joint Apprenticeship Training Committee (JATC) in association with the Sheet Metal Workers’ International Association. The program itself allows students to earn their journeyman’s card in addition to an associate’s degree in applied science.

“I knew if I had any questions, my boys could certainly help their old man,” he said jokingly.

And Chris had questions. Many. Most of them related to the computer class the three of them took at Butler.

“We (Nick and Lucas) would finish our computer homework before the class ended,” Lucas said. “Dad would take it home, and it would take him about five or six hours to finish.”

Lucas, Nick and Chris’ wife, who graduated from Butler a few years ago, helped Chris with his computer homework.

“He was definitely a hunt and peck guy before we started the program,” Nick said.

Although the computer class was difficult, Chris was not daunted. He relished learning. He found that he would learn something in class on Saturday and be able to implement the task the following Monday.

While Chris relied on his sons for help with the academic classes, he was always ready to give them a few pointers with their hands-on HVAC classes.

The three men, who work fulltime, took their Butler courses, sitting side by side, on Saturdays. Two evenings a week the younger Rinke’s went to apprenticeship training. After four years of this grueling schedule, the Rinke’s were ready to graduate.

Nick and Lucas hadn’t planned on going to the graduation ceremony. But Chris felt differently.

“I’m an old dude, and I have a college education now,” Chris said. “I wanted to walk.”

Chris also wanted his sons to walk with him.

“I am pretty proud of my sons,” he said. “It gives me a lump in my throat when I think about it.”

Both Lucas and Nick realized how much walking meant to their father and accompanied him at graduation. During the ceremony this past spring, the three men walked across the stage one behind the other as their names were called out.

“He doesn’t get excited about a bunch, but he lit up at graduation,” Nick said.

Along with taking classes together, Lucas and Nick work side by side each day. They are both glad they were able to take the classes with one another, as well as with their father.

“It was a fun experience for me,” Lucas said. “As we’ve grown older, we’ve grown closer. Graduating together was a pretty big moment.”