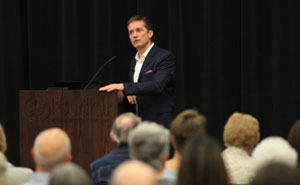 Fabien Cousteau, the grandson of underwater explorer Jacques Cousteau, grew up with a love of the ocean. At 4, he was scuba diving next to his dad.

Cousteau followed in his grandfather’s footsteps as a deep ocean explorer. He is also an environmentally conscious business strategist and filmmaker.

“The magic is living with this planet rather than on this planet,” Cousteau told the Butler audience. Holding up a Styrofoam cup, Cousteau shared his concern for pollution, the slaughter of sharks and the problems with the coral reef. A proponent of underwater exploration, Cousteau spent 31 days underwater – leaving his undersea home daily and exploring the habitat for 12 to 15 hours each day.

“Our oceans are in big trouble,” Cousteau said. “We’ve explored less than 5 percent of that world.”

“I went through some of his twitter, Wiki pages and clips from his documentary,” said Kaeley Hansen, 20, a liberal arts major from Augusta.

Derrick Reid, 18, a Butler student from Michigan was curious about Cousteau’s speech.

“Speeches motivate me to do a lot of stuff I’ve never done,” Reid said.

Michel Larrabee, 18, a Butler technical theatre student from Parsons City said he enjoys watching public speakers. “It helps me to see what they do to keep the audience engaged.”