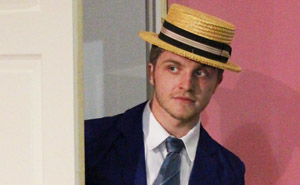 This laugh-out-loud farce, set in Oxford during the Victorian Era, pits two college students and their girlfriends against a cantankerous guardian.

Peterson performed in the play more than four decades ago when he was in graduate school at Emporia State University.  Because he had such fond memories of the play, he was hesitant to stage it. But last year, Peterson realized that his students were missing out on this Frank Loesser classic.

“’Where’s Charley?’ is like meeting an old friend,” Peterson said. “I can tell the students are having fun with the show.” 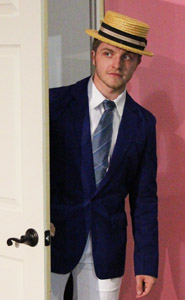 At Emporia, Peterson performed the lead role of Charley Wykeham. At Butler, freshman Seth Knowles, 18, of El Dorado takes on this charged comic part that Ray Bolger, the Scarecrow in “The Wizard of Oz” performed on Broadway. Knowles demonstrated his comic prowess earlier this fall when he took on Bottom in “A Midsummer Night’s Dream.”

“Charley is a good-hearted guy, but sometimes he acts before thinking it through,” Knowles said. “He’s a very lovable character.”

Peterson fondly remembers the excitement of the play and enjoys watching Knowles’ choices for the role that they share in common.

“It’s wonderful to see the material given a new set of clothes,” Peterson said. “It’s a gem of a musical!”

The part of Jack Chesney, Charley’s best friend, will be performed by Chandler Moore of Wichita, Kitty Verdun, Jack’s girlfriend, is played by Dalima Kapten of Goddard and Abigail Staats, of El Dorado, will take on the role of Amy Spettigue, Charley’s girlfriend. Sharon Funk will don each performer in proper 19th century dress.