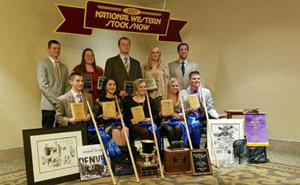 Butler’s team was also Champion Team in both Reasons and Swine. This group of students that come from both within Kansas and outside of the state placed second in High Team Sheep and Cattle.

The National Western Stock Show began in 1906. Each year, the show runs for 16 days and is Colorado’s largest Western trade show.