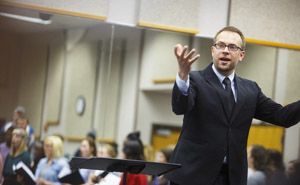 There are times when learning takes place outside the classroom. The performance of “Carousel: A Concert” is one of those times. Forty hand-picked Butler Community College vocal and theatre students will rub shoulders with professional musicians, actors and directors as they ready for Roger’s and Hammerstein’s classic at Century II this weekend. Music Theatre of Wichita and the Wichita Symphony invited Butler students to share in the production.

“The impact theatre can have on young people really cannot be overestimated,” said Wayne Bryan, Artistic Director of Music Theatre of Wichita and “Carousel: A Concert”. “Many students, including some who have not excelled in other areas, discover their own self-worth when joining a theatrical team. Kids who work together putting on a show learn about teamwork, punctuality, collegiality, and resourcefulness and they experience the thrill of seeing something created through group effort that never could have been achieved by individuals working separately.”

Butler students also learn to sing with a professional orchestra, led by a well-renowned conductor. Instead of the usual smaller orchestra that musicals frequently use, this show will have 52 musicians clad in black sitting on stage behind the performers.

“The Choir has performed many times at the Symphony’s Spirit of the Season Holiday Concert,” said Don Reinhold, Chief Executive Officer of the Wichita Symphony. “They are always impeccably prepared and this opportunity will be right up their alley.”

Butler’s vocal music professor Matthew Udland is conducting his school’s chorus. Udland, who has toured the nation in professional casts and appeared with Music Theatre of Wichita, is playing the role of Enoch Snow in the current production.

“Many of these students are studying music or theatre and considering a career in performance,” Udland said. “To work with industry professionals and create art that reaches new audiences is a crucial part of their education.”

Matt Bogart, who is currently in “Jersey Boys” on Broadway, is playing Billy Bigelow. Bogart has performed on Broadway in “Aida”, “Miss Saigon” and “The Civil War.”  Kerry Conte, Katie Banks-Todd, Steve Hitchcock and John Boldenow are also in the cast. Alumna Katie Banks-Todd has performed in both the national tour and the Broadway hit “Phantom of the Opera,” as well as many shows for Music Theatre of Wichita.

The Butler students are featured in several sequences, including "The Carousel Waltz," "June Is Bustin' Out All Over," "A Real Nice Clambake," "Blow High, Blow Low," and the finale "You'll Never Walk Alone."

“The student’s voices will fill Century II Concert Hall, bringing a message of healing and redemption to a receptive audience,” Bryan said. “And in that audience -- who knows? -- maybe another lonely teenager will find his or her calling in a world that enriches the world by creating harmony and art.”