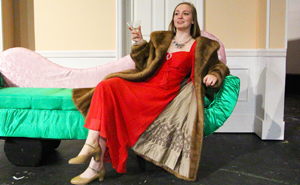 Butler Community College’s Theatre Department will perform “Auntie Mame” a classic by Jerome Lawrence and Robert E. Lee. Based on the novel by Patrick Dennis, “Auntie Mame” chronicles the adventures of an orphan being raised by his eccentric aunt during the late 1920s. Butler’s production of “Auntie Mame” is directed by theatre professor Bob Peterson and designed by Bernie Wonsetler.

Butler Community College was established in 1927— during the same time period that Auntie Mame takes place. Butler is hosting a gathering at the E.B. White Art Gallery to celebrate the college’s 90th Anniversary.  Student artwork is the featured gallery exhibit.

Mame Dennis, also known as “Auntie” Mame, is played by Madisyn Coats of Hanston.
Other cast members include: