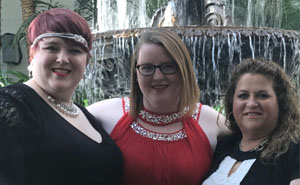 Dehncke and four other officers from the Midwest region were honored with the Distinguished Regional Officer Team award. Distinguished Regional Officer Teams are chosen for their ability to work together to implement the region’s goals, be leaders for chapters and members within the region and to support the overall mission of Phi Theta Kappa. Only three teams are chosen internationally.

Butler’s advisor, Chrissy Baker, received the Paragon Award. The Paragon Award traditionally honors advisors who have made significant contributions to the growth of the individual chapter members and encouraged the chapter to be involved with the local, state and international levels of the organization.