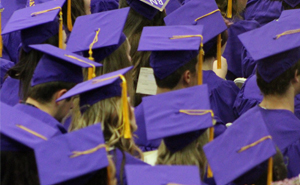 Butler student Olivia Jacoby was awarded a $15,000 to continue her education.

A Butler tradition since 1985, the prestigious Hubbard Award of Excellence is awarded to a student who is exemplary in academic excellence and their involvement on campus as well as community activities. The winner receives a scholarship for four semesters to the institution of their choice after graduating from Butler Community College.

“The Hubbard Award of Excellence personifies quality and superiority. We are eternally grateful to the R.D. and Joan Dale Hubbard Foundation and Mr. R.D. Hubbard in particular for investing in our most esteemed transfer scholarship,” Vice President of Advancement Stacy Cofer said.

This year’s recipient is Olivia Jacoby from Andover, Kan. Jacoby plans to transition to the BEST (Butler and Emporia Students to Teachers) program to continue her studies in elementary education. The BEST program has been in place between Emporia State University and Butler for 13 years, providing graduates the ability to obtain their bachelor’s degree in education from Emporia State without ever having to leave the Butler campus.

Jacoby overcame obstacles in education throughout her life and was told in high school she would not amount to much.

“I was told throughout my educational career that my intelligence was not enough,” Jacoby wrote in her application essay. “However, I found motivation in all of the people who said that I couldn’t amount to much.”

Proving critics wrong, Jacoby maintained a high grade point average during high school and at Butler, working for every straight ‘A’ she received all while participating in honor societies and as a member of the Headliners show choir at Butler, which included filling the role of costume manager for the ensemble. Her extensive volunteer work includes time with the Leukemia and Lymphoma Society, Rainbows East, Read Across America, Victoria Falls Nursing Home and more. She has worked as a nanny, at the YMCA Kid Zone, the South Central Mental Health Counseling Center and Hereford House restaurant in Andover.

“The amount of time, energy, and talent she (Jacoby) has given to our institution is impressive and far above average,” said Matthew Udland, Professor of Vocal Music. “Her peers regularly reflect that they ‘don’t know how she does it.’ Students like Olivia are so rare.”

Jacoby will receive $15,000 to continue her education and achieve her dream of helping young children see that their future is bright.

“My future goals revolve around inspiring children,” Jacoby said. “I plan to be an elementary education teacher in the hopes that I can be the encouragement and inspiration that I didn’t have.”

Runners up for the Hubbard award were Payton Dahmer of Nevada, Mo., who plans to attend Kansas State University and major in agriculture, Madalyn May of El Dorado, who will transfer into the pre-veterinarian program at Kansas State, Sarah Slack of Conway Springs, who will major in music education at Wichita State University and Whitney Whitaker of Atascadero, Calif., who will major in animal science at Kansas State. Both Dahmer and Whitaker were named national All-Americans in Livestock Judging.

In 1985, Butler Community College alumnus R.D. Hubbard (’56) and his wife Joan Dale dedicated the scholarship fund to recognize and encourage academic excellence at Butler. Their Foundation has adopted an entrepreneurial approach to philanthropy that reflects their spirit. Today their primary business interests include a wide range of investments such as land, casinos, and racehorses.