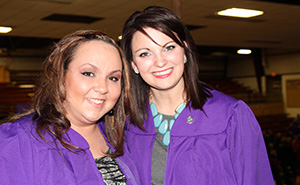 The Nurses Pinning Ceremony is a longtime tradition of the profession, beginning in the U.S. in the 1860s. Butler has awarded nursing pins to its graduates since the establishment of the nursing program in 1965.

The ceremony included a welcome by Anita Mills, MSN, dean of Butler’s Nursing program, and greetings from Tom McKibban, CRNA, MS, chair of the Butler Community College Board of Trustees. McKibban, a 1972 Butler graduate, is president and co-founder of Mid-America Anesthesia Professionals, LLC.

Jody Gragg, RN, BSN, MICT, MHCL, senior director of Outreach Services for Via Christi Health System, was the keynote speaker. During his professional career he has served as a paramedic, flight nurse and Navy Reserve nurse. Gragg is a graduate of Butler’s biology program.

Gragg told the graduates they are entering an empowering profession; one with a future of unlimited personal growth, and development. “It’s a profession whose mission reaches beyond language barriers and geographic boundaries,” he said. “Remain humble to your profession, because certainly one day it will humble you.”

Deidra Cramer, class president, offered her words of congratulations and challenged her fellow graduates to be leaders in the world. She reminded them that leadership was action, not a place of position. “It is our actions that will define us as leaders,” she said. “The actions we will perform for our patients, our families and our colleagues.”

As part of the evening recognition two students were named Distinguished BSNA Graduate Award recipients. The award is given to a graduating nursing student who has a minimum 3.5 cumulative grade point average and demonstrates an exceptional commitment to the nursing profession. The Fall 2014 award was bestowed upon Selena Walker of Augusta and Deidra Cramer of Wichita.

Butler’s candidates for the Associate Degree in Nursing include the following (listed by hometown):