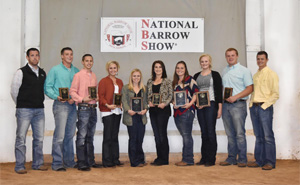 Butler Community College’s Livestock Judging Team won Champion Team Overall at their first tournament of the year. The team attended the National Barrow Show in Austin, Minn. Along with winning the tournament, the team was named Champion Team in Reasons. Last year, Butler’s Livestock Judging team was titled Team of the Year by the Junior College Coaches Association and had one-third of the All-American Awards nationwide.

Butler Community College’s Livestock Judging Team has been honored as a premier team for more than two decades. The team holds more than 60 champion or reserve-champion finishes at national competitions. Butler has fielded more than 48 All-Americans—more than double the amount of any other community college. This winning tradition is the result of a dedication to hard work and a commitment to excellence. The students in the judging program maintain high academic rigor as well, with at least a 3.7 cumulative GPA.