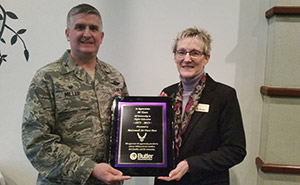 Life in the military can be tough – physically, mentally and emotionally. Nobody knows that better than Dr. Terry Harrison, who is retired from the United States Air Force.

But Harrison believes there’s not only room in military life for college, there’s a need. He’s passionate about the value of education, which is why he was the ideal person to speak at a special event on Feb. 19.

Butler Community College celebrated a 40-year partnership with McConnell Air Force Base by holding an invitation-only reception on base at the Dole Center. Among those in attendance was Butler President Kim Krull, who commemorated the anniversary by presenting a plaque to Col. Albert G. Miller, Commander, 22nd Air Refueling Wing.

But the highlight of the morning was Harrison, who teaches history and minority studies through Butler on the McConnell campus. His speech praised both institutions for seeing the mutual benefit. Indeed, the partnership has flourished – this semester alone, 532 military members and their families are enrolled at Butler.

“I’ve seen students come to me and they’re depressed,” Harrison said in his speech. “Things are not working

out for them. … When a student comes to me, I treat them just like a bald eagle with a baby eaglet. When a student is getting weak, I swoop down, take them back to my nest and I nourish them until they’re ready for their solo flight out into the world.


“So don’t hold back. Let them come to Butler and I guarantee we’ll take good care of them. Let them come, and we’ll make them fly.”

Harrison began teaching at McConnell in 1991. After his speech, Harrison was thoughtful when reflecting back on his career in education.

“When the young military people come back and tell me thank you, because they were able to get an affordable education and have success in their lives, it’s a wonderful thing,” Harrison said. “I have former students right now who are teaching at universities. It’s a blessing.

“I just hope the Lord lets me live a few more years, so I can meet a few more students coming through. Because I know what they’re going through.” 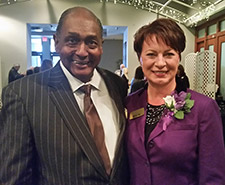 Butler held its first class at McConnell on Jan. 27, 1975. The partnership began with four courses; today about 100 are offered.


Over the last 15 years, Butler has awarded 552 Associates Degrees for military only – and that doesn’t include Community College of the Air Force degrees, which require five Butler courses. Dr. Krull noted in her comments that between Fall 1999 and Fall 2014, more than 16,000 military members and family members have accessed higher education at Butler through this partnership.

“They’ve not only earned degrees,” Krull said, “but they’ve done it while protecting our freedom with a courage that is beyond measure.”

For more information about Butler courses at McConnell Air Force Base visit www.butlercc.edu/mcconnell.