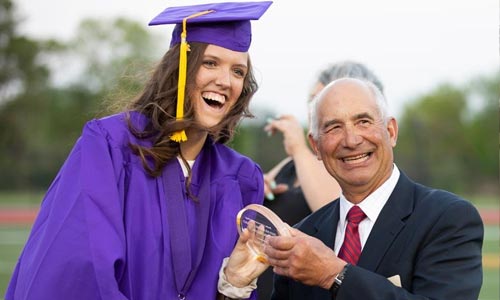 Established by Kansas native and Butler alumnus R.D. Hubbard and his wife Joan Dale in 1985, the Hubbard Award recipient must show outstanding performance inside the classroom and in the community. Hess studied pre-engineering at Butler and will transfer to Kansas State University to major in engineering. Prior to the upcoming fall semester, Hess is participating in an internship at Florida Atlantic University sponsored by the National Science Foundation. At Butler, Hess was on the volleyball team, worked as a college tutor and a lab assistant. She was named Resident of the Year in April. Her name will be placed on the “Hubbard Tree of Knowledge.”

Students who have maintained a 4.0 grade point average by completing at least 30 hours at Butler receive Order of the Gold status. Graduates who achieved this honor were awarded a medallion to wear during commencement. At commencement, they received a plaque.

Butler’s commencement speaker was David Carter, Butler alumnus, who grew up in poverty, living with his family in a shack in Kentucky. He currently serves at Claremont Lincoln University as Vice President for Academic Affairs. Carter has served in the United States Air Force, worked as a police officer and was an education technician for the National Park Service.

His message to the students was simple, but compelling.

“Enjoy the day, but don’t stop learning,” Carter said. He continued, saying, “All of you have the possibility to do great things, but it will be up to you.”

Carter tried relating to students by expressing his past as a Butler graduate, who was once in the same position in life they currently hold.

“I am sharing these things to hopefully inspire you because I am you. I know what it means to sit there and listen to a speaker drone on about their accomplishments. But I am not one of those speakers. I am a proud Butler Community College graduate – who just so happened to pick up a few accomplishments along the way,” said Carter.

Toward the end of his speech, he urged the students to appreciate their Butler education and the opportunities it has awarded them.

“Do not take your time here at Butler for granted. You will reap the return of a time well-invested, but there is work to be done,” he said.

The following includes all Order of the Gold recipients organized alphabetically by Kansas hometowns first: