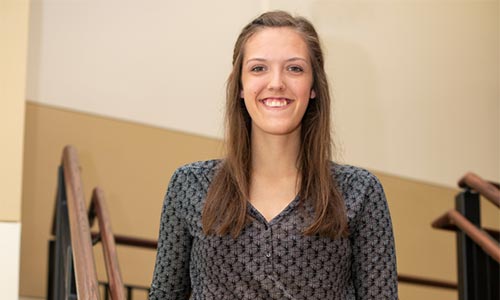 This ten-week program will specialize in environmental engineering. Currently, the FAU is researching methods to harness ocean currents’ energy by using submergible turbines. Similar to wind turbines, these generators can produce energy from Florida’s east coast, which has energy densities several times greater than the most energy dense wind resource in the U.S., according to FAU.

Hess will travel to FAU to study ocean currents by utilizing math equations, lab testing and engaging in fieldwork. Along with peers, she will work to produce a math equation that will predict how the currents flow in the ocean. Among approximately 20 students, Hess was chosen out of numerous applicants ranging from two-year colleges to Division I universities all across the nation. She is excited about this new experience that will propel her into her engineering future at K-State.

As a student-athlete, Hess stayed busy at Butler in the classroom and on the volleyball court. Hess feels prepared for the FAU summer program and K-State because of the foundation Butler helped her build. Hess said, “Butler has been a great experience. It’s given me a good foundation for me to build on when I go somewhere else.”  Hess’s time at Butler made her more confident to bridge the gap between Butler and K-State, and she is excited to have the opportunity to get hands-on experience with what she is studying thanks to FAU.