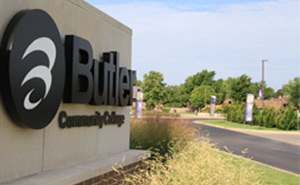 The regular session of the Butler Community College Board of Trustees started in November with an executive session with legal counsel. Following the executive session, Trustees approved the motion to agree to Butler paying 60% of the road construction costs surrounding the property on east 13th street in Andover. The approval came after more than a year of negotiations with the City of Andover.

Under Strategic Discussion, the board also approved a new Military Leave pay policy in support of our military members who may be called to active duty. The college’s previous Military Leave Policy met the basic standards for granting leave without pay for employees while fulfilling military service obligations. The revised policy will provide up to 90 days of differential paid leave (per fiscal year) for active military duty.

During leave, the employee will be paid the difference between normal salary/wages and the amount of pay they receive from the military. This will help military personnel with any financial shortfalls that may exist between their regular salary received while working, and what they receive from the government for military duty. After the maximum 90 calendar days of Butler’s paid military leave is exhausted, the employee may then either use paid time off (vacation, personal or professional leave) during the remainder of his/her military leave or elect to take the remaining leave time without pay.
Scott Rickard, director of the Engineering Department for the City of El Dorado, presented to the Board requesting Butler approve the renewal of the El Dorado Neighborhood Revitalization Project. The Neighborhood Revitalization plan has been in place since 1996. The current plan expires the end of December. The revitalization plan is one of the few tools that El Dorado has to incentivize local economic development. The Board approved the request unanimously.

Under bids and purchases, Trustees approved the purchase with CDW-G for $24,221 for additional wireless and technology infrastructure to support the renovations underway at the college’s 5000 Building. The renovation was made necessary as the college needs to vacate the Andover High School location due to the District’s own construction projects on North Andover Road. Butler is working to move all offices and services out of the high school facilities and into its 5000 Building located on East 13th Street in Andover. Some office and classroom moves are expected to begin in early January.

Dr. Kim Krull, Butler president, also took time to introduce recently elected trustees who were in attendance at the November board meeting. Shelby Smith of District 2, and Julie Winslow of District 1, were present and had to opportunity to meet some members of college leadership. Shelby, Winslow, Mary Martha Good as member-at-large, and Forrest Rhodes, District 3, will be sworn into office during the January Board meeting.