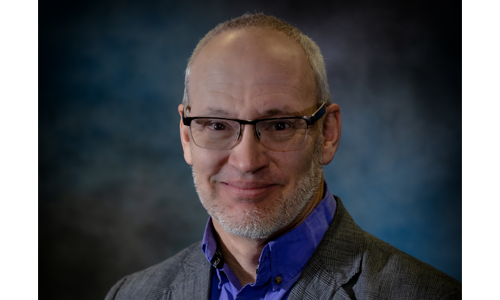 EL DORADO, Kan. – Robert Carlson, a Butler instructor for 30 years, has been named the college’s Master Teacher Award winner for the 2019-2020 academic year.

By earning the award, Carlson will represent Butler as a recipient of the National Institute for Staff and Organizational Development (NISOD) Excellence Award. NISOD assists community and technical college staff in professional development as well as helping faculty meet the needs of students.

According to NISOD, the Excellence Award recognizes community and technical college faculty who perform “extraordinary work on their campuses.” Those chosen have “demonstrated outstanding commitment and contribution to their students and colleagues.”

Carlson teaches chemistry and physics at Butler. He said he strives to get his students to perform at levels they didn’t think were possible, in order to prepare them for the next step in their education.

Carlson said he is honored to earn the accolades, even though it has not been a goal of his.

“I don’t do things to earn awards,” Carlson said. “If you do things for the wrong reason, negative things happen.”

Typically, award winners travel to Austin in late May to attend a banquet and awards ceremony, where they are awarded a medallion. The in-person NISOD gathering for this year has been canceled, however, due to CDC recommendations.

At Butler, Carlson's photo will be added to the wall collection of previous Butler Community College Master Teacher recipients, awarded since 1973. The Master Teacher generally gives an address at the annual commencement ceremony, but that has also been canceled for 2020.

After teaching and coaching at Oberlin High School in western Kansas for five years, Carlson arrived at Butler in 1990. Back then, the entire faculty could fit inside the lecture hall in the 200 Building. The faculty aided with enrollment, which was all done in person in one day. He recalls the 600 Building before the lower level was constructed. At that time, the library was basically on stilts. He also recalls three working oil wells operating on campus in the middle of the parking lots.

Carlson has been a facilitator with the Grizzly Adventures challenge course since its creation in 2003. He was involved this year in the creation of a chemistry video that was shown to thousands of grade school children during a Wichita Thunder hockey game in January at Intrust Bank Arena.

Carlson is a big believer in peer tutoring and has created several initiatives for students to take advantage of, including a weekly tutoring program called Magical Mystical Fridays. He also created Carlson’s Corner on the Andover campus, in which he pulled around a wagon loaded with tutoring materials.

Carlson also has a personal website with about 400 videos that can be used for tutoring purposes that he shares with interested students. It’s all in an effort to help the students be successful.

“I always get excited when I hear from students who have been accepted into the program or school they were trying to get into,” Carlson said. “I’m competitive; I also want my students to be better than I am.”

“I like taking classes because I think it keeps me grounded on how the students feel when I teach,” Carlson said.

While he may someday retire from Butler, Carlson never wants to retire from teaching. He wants to travel and instruct in other schools and other locations to get immersed in different cultures. He said he would like to take classes from MIT and Harvard in the future.

“I don’t know what I want to do when I grow up yet,” Carlson said. “That’s what I’m still trying to figure out."