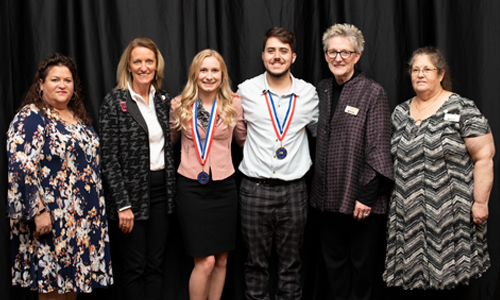 EL DORADO, Kan. – Year after year, Butler Community College students are admitted to the Kansas All-State Academic Team of the Phi Theta Kappa Honor Society and this year is no different.

The following honorary students were awarded a medallion and scholarship, and are now considered for the All-USA National Academic Team:

The honorees were served lunch with legislators, community college administrators, faculty and staff as well as parents.

Heather Morgan, executive director of the Kansas Association of Community College Trustees, opened the ceremony with recognitions of the Kansas legislature and the Phi Theta Kappa board.

This year’s ceremony took a slightly different approach, allowing three PTK honorees to speak instead of hosting an outside keynote speaker.

Priscilla Bianchini of Cowley Community College emphasized small class sizes and affordability of community colleges. She talked about the opportunities she had as an international student attending a community college.

“After attending a community college, a student will be prepared,” said Bianchini.

Nathan Goodwin of Neosho County Community College drove home the importance of connections students receive when attending a community college. Even though he grew up in a rural area, he said he was exposed to areas all over the world, including ethnicity and religion. He said community college taught him how to “communicate with a diverse population.”

“Community college has given me so much,” Goodwin said. “I wouldn’t change a thing.”

Courtney Tinkham of Colby Community College wrapped up the speeches by saying, “the title ‘community college’ lives up to its name.”

“At a community college, they’re willing to fight for your success,” Tinkham said.

She thinks everyone can have a home at a community college regardless of age. She also addressed her appreciation of the big support system she has by saying her community college never gave up on her by pushing her to succeed.