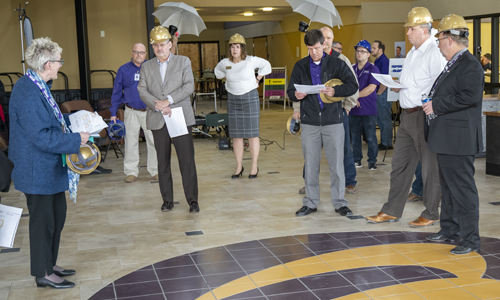 The regular session of the Butler Community College Board of Trustees met July 14 at 4:30 p.m. After being called to order, Trustees entered a 45 min. executive session for consultation with legal counsel regarding litigation pursuant to the open meetings exception for matters protected by attorney-client privilege and to discuss employee performance pursuant to the open meetings exception for personnel matters of non-elected personnel which if discussed in open meeting might violate their right to privacy.

Trustee Julie Winslow asked to add the EduCare Center closing to the agenda. Trustee Chairman Jim Howell declined the request citing the decision has been made by the administration and he saw no benefit in placing it on the agenda. Winslow asked about alternative options for the Center and it was noted that information had been submitted to the board previously.

In his report to the board, Terry Sader, philosophy instructor and president of the Faculty Education Assocation, applauded the efforts for the new faculty contract. He stated it was an extraordinary contract under these circumstances and that the professional employees ratified it overwhelmingly.

Trustee Lance Lechtenberg reported the finance committee reviewed budgets and while the college did see some cost savings, the discussion was more on enrollment and the potential issues that declining enrollments create.

Dr. Kim Krull, Butler President, provided an update on college sports noting most fall sports were being moved to the spring. She said the Jayhawk Conference is currently trying to decide if they could hold fall scrimmages and practices. The conference has put together a small task force to consider options.

Trustee Jim Howell reported on the Education Facilities Authority regarding maintenance of the BG Products Veterans Sports Complex. He noted the jumbotron will need to be replaced in the next few years and the committee needs to begin identifying how to replace it. Mary Martha Good suggested the Authority investigate whether the stadium could qualify for Cares Act funding since there is revenue loss related to COVID-19 and there are still expenses on upkeep.

Trustees discussed the college’s recent decision that masks will be worn on college property for fall. It was explained that this decision was made by the Critical Incident Management Team as part of their response to the pandemic challenges. While masks are required, this is not a college policy, and the college has no legal ability to enforce it. Read more about Butler's response to COVID-19.

Krull updated the board on the possibility of partnering with Wichita State University and WSU Tech on a Midwest Culinary Arts and Hospitality Management Institute that would incorporate Butler’s Culinary Arts degrees and certificates as well as Hotel Management and Event Planning degrees from WSU Tech. Butler’s Culinary Arts and Hospitality Management program has been located at the Boston Rec Center for a number of years.  If the WSU, WSU Tech, Butler partnership is established, the programs would be relocated to downtown Wichita.  The vision is a partnered program that creates one center of excellence for the region. Butler was preparing to move its nationally recognized culinary program downtown with the assistance of private investors a few years ago when WSU halted the project. The Kansas Board of Regents recently approved a Hotel Management and Event Planning program at WSU Tech. Butler has had offerings in Hospitality Management since 1989. Discussions are continuing regarding this potential partnership.

In June, Trustees gave authority to the administration to purchase the college’s commercial insurance policies prior to the July 1 renewal date. Kent Williams, vice president of finance, reported the final listing of premiums in the amount of $928,885, an increase of $389,341 with a maximum deductible of $1.8 million. He noted that the increase is in line with other community colleges in Kansas due to claims experiences in tornado alley and the market conditions of the insurance industry. Williams noted it is unlikely that the maximum deductible will be met due of the diverse locations of college facilities.

The board unanimously approved the Association of Community College Trustees (ACCT) Standards of Good Practice. At the beginning of each year, Trustees review the standards and reaffirm, as a board, their support of them.

Trustees also reviewed and approved the KBOR year-three Performance Report and a Sports Accident Catastrophic Policy, and updates to the college’s Facilities Use Policy.

Shelley Stultz, associate vice president of human resources, presented to the board for action the revised early retirement policy for nonfaculty members. The board reviewed the recommendation in June. The revisions were recommended to curve the growing healthcare costs. Currently, the college contributes to healthcare coverage for full-time employees with ten or more years of continuous service who are between the ages of 60-64 when they retire and their family members until the retiree is 65 years old. The recommendation eliminated health care contributions for anyone other than the retiree. Trustees approved the motion unanimously.

Trustees unanimously ratified the Mutual Gains Bargaining agreement with faculty. To avoid any misconstrued notion of conflict of interest, Trustees Forrest Rhodes and Lance Lechtenberg recused themselves from the discussion and vote as both have spouses who work for the college. The agreement held salary increases at $0, increased healthcare contribution by the college to partially offset the 10% annual renewal increase and provided some language updates. The faculty ratified the agreement on July 13. Trustees then mirrored the approval for college staff with only increases healthcare contributions.

The retirements of Janice English, custodial technician, and Susan Pfeifer, math instructor, were accepted by the board. Both has served Butler and its students for several years.

Trustees pulled the resolution for Emprise Bank and through conversation determined they preferred requiring two signatures from the college. The motion passed unanimously.

Under the Consent Agenda, Trustees approved the renewal of the Neighborhood Revitalization Program with the City of Augusta. Trustees also approved Workforce Innovation Opportunity Act (WIOA) funding in support of the efforts of Workforce Alliance of South-Central Kansas to assist adult learners seeking training.

Trustees approved an agreement with MedCerts to deliver online career certification training through Butler’s customized training division, BETA. Programs part of the agreement include such as medical billing and dental assistant, medical assistant, and veterinary technician to numerous other medical related options. The partnership also includes IT careers such as IT helpdesk administrator, IT Network Technician and others.

Other outstanding students and faculty were recognized:

Connie Belden, Butler business administration/accounting professor, was awarded the American Accounting Association Cook Award. Heather Rinkenbaugh, dean of online, high school and community learning, was named to the 2020 Wichita Business Journal’s Women in Business Honorees. And, Dr. Esam Mohammad, associate vice president of research, received the Kansas Board of Regents Data Quality Award. Butler is only 1 of 3 Kansas institutions to ever be awarded this honor more than once.

Trustees adjourned their regular meeting and went into a budget work session with no action following. Trustees will meet to approve the Notice of Public Hearing at 5 p.m., July 28.

The Board of Trustees meetings are available for viewing on the BCTV 20 YouTube channel.