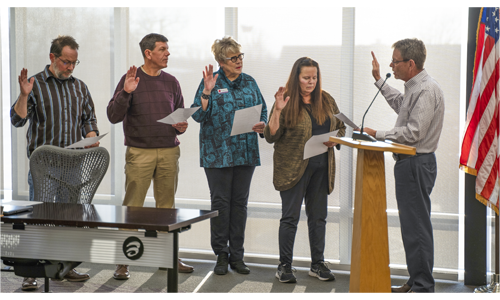 Butler Community College Trustees passed the proposed budget and Notice of Public Hearing for the 2020-2021 legal and operating budgets after lengthy discussion and debate during a special board meeting held Tuesday evening.

The board ultimately approved the unrestricted General Fund taxes to be levied at 16.00 mills and the capital outlay mills to be levied at 1.826, setting the total for taxes levied at $14,420,075 and a total mill rate of 17.846. The motion passed 4 to 2 after Trustees considered and failed multiple other options.

It was noted during the meeting that the Notice of Public Hearing sets the taxes to be levied at the maximum and trustees could agree to lower it further before taking action at the August board meeting. It was also noted, however, that couldn’t be done without cuts.

Trustees Forrest Rhodes and Lance Lechtenberg opposed the motion. Rhodes cited the decision to decrease the taxes to 16.00 mills could still be accomplished even if a higher mill was approved for the published budget. He felt he needed more information on what the actual impact would be on the college and its programs.

Chair Jim Howell was unable to attend the meeting. Trustee Mary Martha Good was able to attend late and play a deciding factor in the passing of the final motion. The Notice of Public Hearing was approved for publishing and will be voted on by the Board at the August 11 monthly board meeting.

The reduction in taxes levied is $1.2 million less than the first option reviewed by the board which failed to pass and is $550,000 less than option 2. This motion also failed to pass. The administration estimates this year only 85% of tax dollars will be collected versus the typical 93% which will put actual taxes most likely collected at a little more than $12 million rather than the published $14,420,075.

Trustees also moved their August meeting to the Hubbard Welcome Center on the El Dorado campus. The special meeting can be viewed in its entirety on the BCTV 20 Youtube Channel.