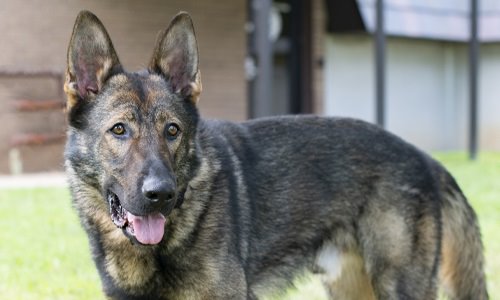 When Lt. Tim Harder’s remaining GI Bill benefits were about to expire, he found a way to donate $18,700 to Butler Community College to get a new partner — not in but against crime — meet Haxo.

Harder served in the U.S. Marines from 2005 to 2009. He’d already earned an associate degree and had “four months and some days remaining” to use his GI Bill. He did some research about K-9 officers and put together a plan.

That he did so is remarkable, said Tom Borrego, executive director of the Butler Community College Foundation.

“I think it’s absolutely incredible,” Borrego said. “To think of the school as a part of his philanthropic giving is extremely nice. To give something back to the (college) is extraordinarily generous of him.”

Haxo is Butler’s first K-9 officer. Harder and Haxo now patrol together as members of the Butler's Campus Safety Department.

“It was a very resourceful way to fill a need that the college had,” Kenney said about tapping his GI Bill funds. “It kind of shows you the type of person Lt. Harder is. It’s that service-before-self mentality that military and law enforcement personnel have.”

Harder spent two months earlier this year training Haxo at American K-9 Interdiction in Virginia. He lived in a dorm and spent his days focused on turning Haxo into a narcotics detection officer, finishing the intensive program in June. Haxo is now trained on six types of drugs.

“It was overwhelming,” Harder said of the program.

Training was a full-time job, and then students also had to clean their dogs’ kennels.

Harder thinks Haxo is from the Czech Republic. His pedigree paperwork is in Dutch.

Harder has had dogs as pets before, but not recently.

Haxo lives at Harder’s home, where he has a kennel. Harder spends at least one hour a night on training.

When he does what he’s supposed to, he gets to play with his reward toy — a gappay ball.

“It’s a rubber ball on a rope,” Harder explained.

At the school, dogs in the narcotics track trained on a scent wall. The wall featured eight holes in a pyramid. Haxo and the other dogs’ job was to smell the holes and detect which had the odor of drugs.

When they did so successfully, they were rewarded.

“If I smell it, I want to get paid,” Harder said of the dogs’ mentality.

Harder uses the commands “find it” and “search” to instruct Haxo.

Harder can’t ask students — or anyone on campus, for that matter — to consent to a search when Haxo is present. That’s illegal because it’s considered intimidation, he said.

Haxo is trained to sit or lay down when he smells drugs. He’s not trained to attack someone carrying drugs.

Harder has taken him around on campus but still is teaching him how to be around other people. Haxo wears a patch that says, “Do not pet.” It’s a constant reminder as often people's first instinct is to pet the beautifully-colored animal.

That’s because he’s not a pet, Harder said.

Family and friends have asked Harder to bring Haxo out during visits, but Harder respectfully declines.

Haxo is a strong dog but knows Harder is the boss, Harder said.

“I think he’s got a good understanding of that,” Harder said.

Harder said he’s also learned a lot about himself by training Haxo.

“We match pretty well,” he said.