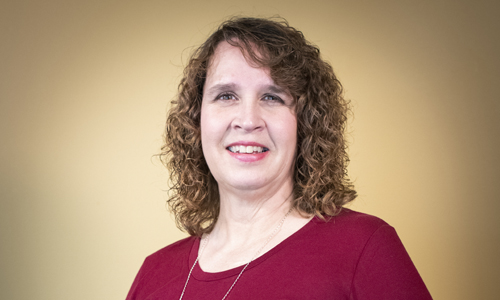 Get to know Lori Winningham

EL DORADO, Kan. – Lori Winningham, Butler Community College Vice President of Academics, has been working at Butler since 1992 and was recognized on August 27th for a Wichita Business Journal Women Who Lead in Education award. Every year the Wichita Business Journal recognizes outstanding women in the Wichita area for their numerous accomplishments and contributions to the success of other women.

Winningham began her career path in the Air Force at the Los Angeles Air Force Base, then Castle Air Force Base, working on the space program and performing cost analyses. She later transferred with her husband to McConnell Air Force Base and worked as a budget officer for the City of Wichita. She began teaching at Butler in the summer of 1992 in the area of mathematics.

A short number of years later, the dean position for the Behavioral Science, Math, Science and Physical Education Division opened and Winningham was selected to the role. Stepping into the position, Winningham was equipped to lead this division, having the knowledge and experience of previously being an instructor. She served the institution as division dean for approximately 20 years and continued to teach classes as the dean. In 2016, Winningham was named to the position she currently holds at Butler—Vice President of Academics.

Dr. Kim Krull, president of Butler, shed light on Winningham’s character saying, “Lori exemplifies Butler’s timeless institutional values of quality, integrity, caring and service. Those are foundational in all that she does. She sets high standards of excellence for herself and expects those around her to do the same.”

Winningham found herself in leadership positions in 4-H, Phi Theta Kappa, and ROTC, but credits the fine-tuning of her skills to the Air Force. She uses those experiences to lead as Vice President of Academics, creating an atmosphere of caring and service to the young women around her in higher education which is why she is deemed worthy of the WBJ Women Who Lead in Education.

“I value individual differences and work to recognize that members of my team have various strengths and shortcomings. It is by putting the right individuals in the right positions that we maximize the strength of the team,” said Winningham.

In regard to earning this award, Winningham said, “I feel thankful for being honored for this award, but if I was not being recognized, I would be fine with that as well. I have worked hard and been a loyal Butler employee here to serve our students—that is what really matters to me.”