From Scraps to ‘Scrappy’ 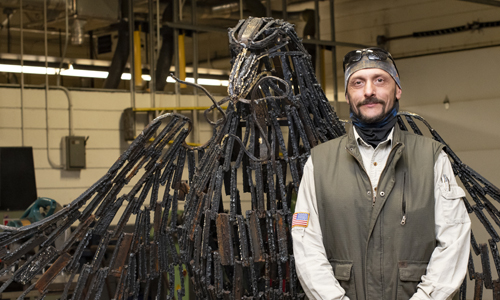 When Loyd Johnston of Wichita found himself unemployed at the beginning of the year, he had to stop and think about some things. What should he do next? What should he focus his time and energy on? And, if he opted for new training – how would he pay for it?

Johnston decided to focus on an area he had always found interesting, welding. He had even had some welding jobs but never any formal training. He also remembered that while in high school in Augusta in 1996, he had been awarded a Camp Butler 2000 Scholarship from Butler Community College, but he never attended.

He inquired with Butler about welding and about the scholarship. To his surprise, it was still waiting for him. Camp Butler 2000 Scholarships are special. They are the result of a collaborative effort between the College and Butler County high schools. When select middle school students complete summer camps at Butler and graduate from high school – they receive a books and tuition scholarship from Butler. Period. No expiration date.

“This class is one of the best classes I’ve ever taught out here,” said Matthew Galbraith, Butler welding technology lead instructor, whose been teaching welding since 2000. I have several who are just top notch and naturally skilled for this. Before the end of the semester, they had already completed one certification and are now rolling for the second one. They finish it next semester.”

Their progress also meant Galbraith had to come up with some new challenges to finish out the semester – an already shortened semester due to COVID. Butler’s fall semester ended Nov 24.

Galbraith presented Johnston with a photo of a bald eagle and asked, “Think you can do this?”

Johnston responded, “I can try.”

Then came the real challenge. “Make it out of nothing but what you find in the scrap bin.”

Fifty-six hours, sticks of filler rod and a pile of scrap metal later, ‘Scrappy’ was born. The estimated 500-600 lb. welded art piece is completely created out of scrap from the welding class dumpster. Plus, no drawings, no blueprints. Just a guy with a vision, a pile of metal, and a hot torch.

As Scrappy took shape, Johnston used three methods of metallurgy – GTAW (TIG), oxy fuel, and GMAW (MIG), plus bronze brazing and a touch of chemistry with a spritz of vinegar here and there for an enhanced timber look.

As a first-year welding student headed toward a two-year degree, it appears Johnston has also unleashed an artist. When asked if he thinks of himself as an artist, he didn’t have an answer for several seconds.

He eventually simply said, “I don’t know. I’m me and when I get an idea, if it comes out looking good, that’s just all the better.”

Johnston is donating the sculpture to Butler and the college’s leadership is considering various indoor locations to display his work.

Meanwhile, visions of his next sculpture are already taking shape in Johnston’s head.