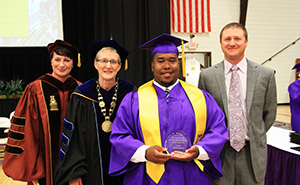 The prestigious Hubbard Award of Excellence is awarded each May to a Butler graduate who has demonstrated exemplary work in academic excellence as well as campus and community activities.

This year’s recipient is Miquel Swann, a non-traditional, international student from the Bahamas who has shown leadership skills beyond compare as a resident assistant, Phi Beta Lambda member and officer, student worker, and president of the Student Government Association.
Swann received the award at Butler’s 88th Commencement ceremony held May 16 at the Butler of El Dorado campus. He plans to transfer to Newman University and use the scholarship to pursue a Bachelor of Science in Accounting with a minor in Information Technology. The Hubbard Award of Excellence pays for four semesters at an institution of the recipient’s choice upon graduation from Butler Community College.
“During the past 27 months here at Butler, I have grown into not only a committed student, but a strong leader and well-respected peer and student on both of our major campuses,” Swann said. “I believe that I have been given the tools and have been prepared to be successful…for classrooms and environments beyond Butler.”
In 1985, Butler Community College alumnus R.D. Hubbard (’56) and his wife Joan Dale dedicated the scholarship fund to recognize and encourage academic excellence at Butler. Their Foundation has adopted an entrepreneurial approach to philanthropy that reflects their spirit.
“The Hubbard Award of Excellence personifies quality and superiority. We are eternally grateful to the Hubbard Foundation and Mr. R.D. Hubbard in particular for investing in our most prestigious transfer scholarship,” Vice President of Advancement Stacy Cofer said.
Philanthropic contributions to Butler Community College are coordinated by the Butler Community College Foundation. The foundation manages fundraising efforts with alumni, friends, corporations and foundations to secure private support for the college.
For more information about the Butler Community College Foundation visit our website at http://foundation.butlercc.edu or at www.facebook.com/ButlerFoundation.