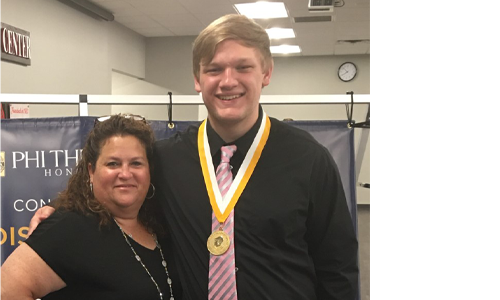 EL DORADO, Kan. – At Phi Theta Kappa’s Catalyst/Regional Conference on April 10, Butler student Hayden Jansen was named president of the Kansas/Nebraska region for Phi Theta Kappa. Under this role, Jansen will have a myriad of responsibilities including to arrange and help lead regional conventions, to be a speaker at induction ceremonies across the region, to work with the regional team, and to be a liaison between chapters and regional coordinators.

“To me, serving as President for the Kansas/Nebraska region of Phi Theta Kappa is a great opportunity to learn more about PTK, connect with members at the regional and international level, and grow as a leader. I love meeting new people, and I believe serving as president will provide me with that opportunity,” says Jansen.

As president, Jansen plans to assist in the transition from virtual to in-person conferences as the COVID-19 pandemic subsides. He also hopes to gain new connections and be remembered as a strong leader.

Phi Theta Kappa Honor Society, founded in 1918, is the largest honor society for two-year colleges, with 1,285 college chapters in all 50 states and abroad. More than 3 million students have been inducted since the organization’s founding, with nearly 134,000 inducted annually.