Nearly 1,000 spring graduates were celebrated this May at Butler Community College. Those who participated in the college’s 94th Commencement Exercises, were donned in purple gowns and mortar boards, graduates stepped onto the field of BG Products Veterans Sports Complex on Friday, May 14, to accept their diplomas.

The Commencement Speaker for the evening was Butler’s 2021 Distinguished Alumna, Junetta Everett. A first-generation college student, Everett came to Butler in 1973 and participated in track and field. She was instrumental in organizing Butler’s Black Student Union (now called the Black Student Association) and served as its president.

Having worked as a Registered Dental Hygienist for more than ten years, Everett joined Delta Dental of Kansas in 1987 and just recently retired after serving as the Vice President of Professional Relations for the past 27 years.

Throughout her career, Everett has focused on diversity and inclusion, improving opportunities for minorities and women. She has served Wichita and the surrounding area extensively. In 2020, she served as the Wichita Regional Chamber of Commerce Chair - the first person of color and only the sixth female in the Chamber’s history to serve as Chair. Her other board service includes the Kansas Health Foundation, Wesley Hospital, Equity Bank, and a few Boards at Wichita State University. Having received numerous awards for her service in the area, Everett was recently inducted into The Kansas African American Trailblazer’s Hall of Fame.

Everett’s inspiring speech to the graduates wove in examples of individuals, including herself, who succeeded not by accepting society’s limitations, but by writing their own stories.

Everett related the many adversities she had to overcome to achieve her goals in life.

“It’s my story, and I didn’t let anyone else hold the pen,” she said.

As she concluded, Everett encouraged the graduates to take charge of their own success.

“As you move forward from this day, starting a new chapter in your life, if opportunity doesn't knock, build a door.”

Everett continued, “Embrace the journey. Experience new things. Challenge yourself and others. Be vulnerable but be bold. Don’t contribute to the wealthiest place in the world. Prove to yourself that you do have what it takes to succeed. It’s your pen. It’s your story. Now go and write it.”

After Everett’s speech, the Hubbard of Excellence and the Board of Trustee Scholarship were presented to two Butler outstanding students, Janet Busenitz and Mara Stewart.

The Hubbard Award of Excellence, Butler’s most prestigious award, is awarded each spring to a graduating sophomore. The winner is given a $15,000 scholarship to the college or university of their choice, and their name is displayed on the “Hubbard Tree of Knowledge.” Each of the other four finalists will receive a $500 scholarship to be used at their transfer institution.

Rod Young, President of the Foundation Board of Directors and Board of Trustees member Forrest Rhodes, presented this year’s award to Janet Busenitz of Burns.

Busenitz will continue her education at the University of Kansas and major in nursing. She has compassion and is driven to impact humanity by serving as a nurse. One of Janet’s professors described her as a student whose classmates and peers gravitate toward.

“Our 2021 Hubbard Award of Excellence finalists are the best of the best. They are incredible students both in the classroom and in their communities,” said Rhodes.

The Butler Community College Board of Trustee Scholarship was presented to Mara Stewart of El Dorado. Stewart will continue her educational journey in marketing at Oklahoma Christian University. While at Butler, she served as the Collegiate DECA club President, worked as a student intern in Butler’s marketing department, and performed as a Butler Headliner. 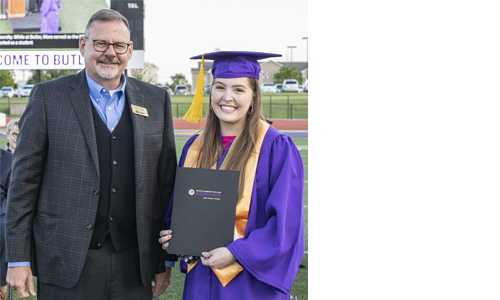