Butler 2021 Order of the Purple and Gold graduates recognized 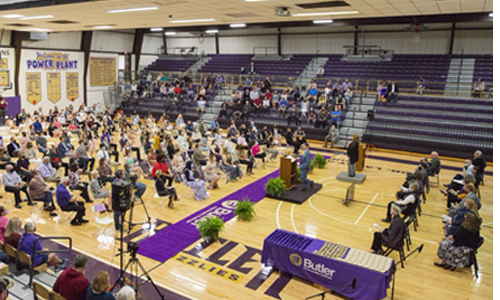 On Friday, May 14, more than 170 Butler Community College graduating sophomores were recognized for their outstanding academic achievement at the annual Honors & Awards Recognition Ceremony, formerly called the Order of the Purple Ceremony.

As the 2021 Master Teacher, Teubner served as the keynoted speaker. He addressed the honorees, acknowledging their outstanding academic achievement while also enduring a pandemic. Teubner, associate professor of English, was named the 2021 Master Teacher by the Butler Community College Education Association. Each year the BCCEA selects a faculty member who exemplifies teaching at its finest and awards that individual the prestigious title of Master Teacher. After earning his Master of Arts in English Literature at Wichita State University in 2012, Teubner began teaching at Butler, where he has remained ever since. Inside the classroom and online, Teubner works hard at developing ways to actively engage students.

“In addition to the content being extremely difficult, in addition to life being difficult, you have done this under one of the most stressful set of circumstances any college student in history has ever encountered,” said Teubner.

The Huey award was established in 1989 in memory of Gregory A. “Huey” Bales of Yates Center. Greg, who was active in journalism, music, and theater, exemplified the highest standard of college students. Each year the Huey award is given to an Order of the Purple graduate who possesses the same high standards. This year’s recipient was Christian Watkins of Wichita.

The Helen Teter Zebold Science Award was established in 1984 in memory of Mrs. Zebold. Each year, it is awarded to a graduating sophomore majoring in science, math, or engineering. The student selected must be fully committed to continuing study in that major and completing a bachelor's degree. Kaylie Hansen of Wichita was named the recipient of this award.

The Frank H. Cron History Award is presented each year to a student graduating with a degree in History. Like former Senator Cron, the student should demonstrate high standards of civic pride and American patriotism, as well as a deep fascination and appreciation for history. Tia Tonn, on behalf of the Kansas Oil Museum and Butler County Historical Society, announced Zachary Grelinger of Derby as this year’s award winner. Grelinger receives a $500 scholarship, a medallion and his name placed on a plague in the museum.

Averie Nelson of the Butler Foundation and Junetta Everett, Distinguished Alumna recipient, awarded the Winnie Broers scholarship to Taylor Dieball of El Dorado. This honor is awarded annually to an eligible graduating sophomore. The recipient receives the scholarship for four semesters while attending either Kansas State University or the University of Kansas. Dieball was a participant on the nationally ranked Butler Livestock Judging Team. She is headed to K-State to continue her education in animal science with the long-term goal of becoming a veterinarian and studying bovine reproduction.

The David and Shirley Longfellow BEST Scholarship supports one student who is dedicating their career to teaching by completing their degree in the BEST (Butler/Emporia Students to Teachers) Program. This scholarship was awarded to Jessie Nibarger of Towanda. Nibarger earned NJCAA All-Academic First Team honors in volleyball and is a Phi Beta Kappa All-State Academic Team Honor recipient. Nibarger looks forward to becoming an elementary school teacher.

The Crossland Family Presidential Scholarship supports one student who is attending Pittsburg State University following their graduation from Butler. This year’s recipient is Tori Rhynard of Derby. Rhynard is a graduate of Butler’s Early College Academy Humanities pathway. She will continue her education at Pittsburg State University, majoring in Family and Consumer Science.

Listed below are Order of the Gold, Order of the Purple, and those faculty selected by their students to be honored as Outstanding Faculty.

Order of the Gold Candidates by Hometown

Order of the Purple Candidates by Hometown