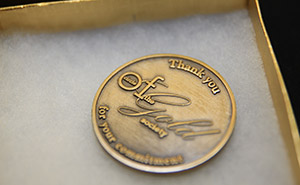 As a young-faced 27 year old, Mario Triana of El Dorado, doesn’t appear to have carried the worries and responsibilities life has dealt him.

He doesn’t have enough wrinkles on his face for a war veteran, husband, stepfather and recent college graduate. However, his burdens are real,  and he took time Friday, June 19, to thank a group of people for helping him with one burden – finding the money to pay for college when his G.I. Bill ran out.

The Circle of the Gold luncheon, which featured Triana, a 2015 Butler graduate as keynote speaker, is a special event hosted annually by the Butler Community College Foundation. The Circle of Gold Society highlights those individuals who have signed a Declaration of Intent to include Butler in their estate plans. The luncheon this year was sponsored by Commerce Bank of El Dorado.

In a typical year, four or five new inductees are recognized as new members of the Circle of Gold. This year, 14 inductees (individuals/couples) were honored at the annual luncheon held inside the Hubbard Welcome Center.

“The increase in inductees is a sign that the Forever Butler Campaign, a $10 million campaign effort to raise funds for student scholarships and academic programs, is alive and well,” said Stacy Cofer, vice president of Advancement for Butler. “The Circle of Gold is an exclusive society for members who have provided a gift for Butler and for the future, a gift that makes a difference in students’ lives every day.”

And Triana knows firsthand the impact that generosity can have. A 2006 graduate of El Dorado High School, Triana eventually left his job, enlisted in the Army and served in Afghanistan. Upon his return, he utilized his G.I. Bill to enter Butler. He had plans. He was going to major in business, marry his fiancé and be a good stepfather to her little girl.

However, life doesn’t always go as planned and Triana was laid off from work. His next job search led him to the First Baptist Daycare. And life changed again. He loved his job, discovered his passion, and changed his major to Elementary Education. But, when he was preparing for his last semester in college he was informed his G.I. Bill was done and he was left wondering how he could pay for his final semester at Butler.

Triana applauded the generosity of those in the room as the Foundation was able to provide him a scholarship to help cover tuition costs.

“Without that financial help from people like you in this room for the people needing help to pursue their dreams, it would be just that – only dreams,” Triana said. “On behalf of those before me, now, and in the future who will benefit from your generosity, I say thank you.”

Triana graduated with honors in May from Butler and is now planning to complete his bachelor’s degree in Elementary Education from Emporia State University through the Butler/Emporia Students to Teachers (BEST) program. He will take advantage of the program’s expansion to Andover where night classes will be offered.

2015 Inductees into the Butler Community College Foundation Circle of Gold Society include: