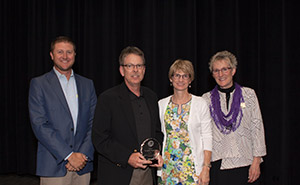 Foundation Board President Jeremy Sundgren of El Dorado made that announcement at the President’s Donor Dinner, to thundering applause.

That’s a lot of money, but Butler nursing student LeAnn Hoover of Derby reminded those in attendance exactly who it affects.

Hoover delivered an emotional message as the keynote speaker at the event, which was Sept. 3 at the Hubbard Welcome Center. As a former Jehovah’s Witness, and the daughter of a church leader, she was discouraged from attending college as a young woman. At 18, she met her husband at a church event and they were married shortly thereafter.

While they were still newlyweds, her husband was in a vehicle that was struck by a train. The collision killed the driver. Hoover’s husband was left for dead.

He survived, but his health problems continue to this day. He had broken bones from head to toe, brain trauma and several other injuries. When her grandmother’s health also took a turn for the worse, the couple and their young daughter moved in with her.

While she was caring for the woman, Hoover made a remark that she wouldn’t mind becoming a nurse someday.

“LeAnn, you already are,” her grandmother replied. “Just go get the degree.”

Degree? Hoover was an office manager, on the wrong side of 40 years old. She’d never set foot on a college campus. She had no idea where to even begin.

“I never allowed myself to dream about what kind of career I might have, or really what my interests were,” Hoover said.

But after talking it over with her family, Hoover decided to go for it. And that meant they would have to leave the church, along with most of their friends and family.

“I have to admit I was terrified,” Hoover said.

Hoover is 44 now. In December, she will receive an Associate Degree in Nursing from Butler Community College. Her goal is to be accepted in the University of Kansas Medical School to become a nurse practitioner. Her daughter is 17, with plans to attend Butler next year.

Things aren’t all good. In May, doctors discovered her husband had a brain tumor. But it’s not cancerous, and the family now has health insurance to ease the financial burden.

“Even through his health problems, he’s my best study partner,” Hoover said. “Without him, I don’t think I would have passed anatomy and physiology. Completing my degree has become a family goal. My daughter and my husband are my biggest fans.”

And Hoover is the Butler Foundation’s biggest fan.

“Without the academic scholarships and grants, there would be no way I could have attended college, or continue to attend college,” Hoover told the audience. “I want you to understand that you are changing lives, in a way that you may have never imagined. I want to thank you personally for allowing me to chase my dream.”

Butler’s annual President’s Donor Dinner recognizes donors who gave at a particular level for the first time. While $500 is the initial annual recognition level, $10,000 is the first lifetime giving level recognized. This year the foundation recognized two new givers at the $250,000 level: C-Tech Industrial Group, Inc. and Dennis and Ardis (deceased) Hanson of El Dorado.

Another highlight of the evening was Athletic Director Todd Carter’s announcement that Albert Hogoboom Oil Field Trucking, Inc. was the recipient of the Dr. Larry Abraham Grizzlybacker of The Year Award.

The event was sponsored by Media Partners Inc, ICI, Commerce Bank, and Foulston Siefkin, with entertainment provided by the Butler Smorgaschords.