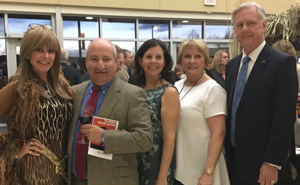 The generosity and support for the Butler Community College Foundation Annual Fund was overwhelming Friday night during the college’s 19th Butler Benefit Auction.

The event, held in the Hubbard Welcome Center on the El Dorado campus, captured the feel of a Sunset Safari and raised a record-breaking $245,000.

This year’s Honorary Chairs were Wink and Libba Hartman of Wichita. The top selling auction item, a trip to the 100th Running of the Indy500 donated by the Hartman’s, sold to Dr. Barry and Alice Bloom for $17,000.

“The support demonstrated Friday night for Butler Community College and our mission was amazing,” said Mary Moon, executive director of Community Advancement for Butler. “We are grateful for Wink and Libba Hartman’s leadership and the generosity of numerous businesses and individuals who contributed to the success of this event.”

Sierra Scott was emcee for the Sunset Safari event which provided more than 350 donors an elegant evening of live music by Butler instrumental music students during a cocktail reception and silent auction. Immediately following the reception was a plated dinner and live auction.

“We are truly thankful to everyone who attended our event and made it such an amazing night. We couldn’t do it without our sponsors, volunteers, and donors. The gifts made will truly impact students’ lives though the work of the Foundation,” Moon said.