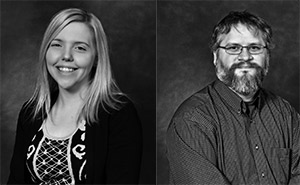 Believers that community college instructors have a great impact on the well-being and success of students in the classroom, John and Suanne Roueche have developed a partnership with the League for Innovation in the Community College in order to recognize the abilities of community college teachers.

Presented by the League for Innovation in the Community College, the award honors faculty for abilities in teaching, leadership and innovation. Students and faculty have the opportunity to nominate teaching staff for this award. This year, more than 100 submissions were received on behalf of Butler students and faculty. Each recipient of the award is presented with airfare, lodging and registration fees to the League’s Innovations Conference in Chicago, as well as a $500 stipend.

According to McCaffree-Wallace, this year’s full-time faculty award winner, simply being nominated for the award was an honor.

“I was nominated by one of my students which makes this award even more meaningful to me,” McCaffree-Wallace said. “I work hard, and I know my administrators and colleagues know that, but the fact that my one of students thinks I deserve to be recognized for being an “excellent” teacher and actually went out of their way to fill out the nomination form, makes it incredibly meaningful. My students are all busy people who work and have families and often have a lot of stress in their lives, so one of them spending time on something for me without being asked is really the highest form of praise.”

For Crowder, the Roueche Excellence Award is a reminder that it is possible to have an influence on students’ lives.

“Being a recipient of this award is an honor,” Crowder said. “It is a small token knowing that I have been able to impact lives in the classroom. Looking back through the years, certain teachers had a greater impact on me than others. And I am sure others have the same experience. But those teachers do not know what an impact, if any, that they did have on their students unless an individual tells them so in the future. Thankfully, I have been able to tell those individuals who impacted my life the most. If it were not for those individuals, I would not be the professor that I am today or the lifelong learner that I am.”

Crowder and McCaffree-Wallace were chosen for this award by a selection committee which evaluated each Butler nominee with a rubric focusing on criteria such as teaching ability, leadership, technology utilization, and care shown to students.