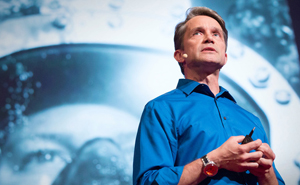 Though leaves are falling from the trees and there is no warm ocean beach nearby, those attending a morning presentation on November 1 will see some beautiful ocean images and learn facts about the deeper parts of the ocean from a family name well known across the country.

The Butler Community College Foundation is pleased to announce the Harold Smith Cultural Series will feature Fabien Cousteau, grandson of the legendary explorer Jacques Cousteau. He is scheduled to speak at 10 a.m., Nov. 1, in the Clifford/Stone Community Room of the Hubbard Welcome Center on Butler’s El Dorado campus.

Cousteau has followed in his grandfather’s footsteps as a deep ocean explorer. He is also an environmentally conscious business strategist. His talk, Oasis in Space: The Great Ocean Adventure, will highlight a three-generation journey of contemporary ocean exploration. Underwater camera housings and subaquatic habitats will be part of the presentation as Cousteau also shares awe-inspiring stories from his family’s legendary adventures.

As the first grandson of Jacques-Yves Cousteau, Fabien Cousteau spent his early years aboard his famous grandfather's ships, learning how to scuba dive on his fourth birthday. Today, the aquanaut and documentary filmmaker continues to fulfill his family's legacy of protecting and preserving the planet's extensive and endangered marine inhabitants and habitats. He uses his experience and knowledge to promote environmental discipline as a viable basis for cutting-edge solutions that strike a balance between regional and global environmental problems, and the realities of market economies.

The 2016 Harold Smith Cultural Series event is free and open to the public. Questions about the event may be directed to Mary Moon, Executive Director of Community Advancement, at 316.218.6338 or email mmoon@butlercc.edu.

About the Harold Smith Cultural Series

The Harold Smith Cultural Series was established at Butler Community College following the death of Harold Smith in 1988. The speaker series was established to bring celebrated speakers to Butler Community College so Butler County area residents could attend at no charge.
This unique gift has been responsible for bringing impressive speakers to Butler’s campus such as: Michael Uslan, originator and executive producer of all Batman movies (2014); Warren Brown, founder and owner of CakeLove Bakery, (2012); Alan Mulally, president and CEO of Ford Motor Company (2008); and Barbara Bush, former first lady and presidential mother (2002).

Mr. Smith attended El Dorado High School and El Dorado Junior College before attending college at Northwestern University in 1930. While in Chicago, he discovered an access to certain events that had not been available in El Dorado. Never married, Smith left nearly his entire estate to charitable organizations and Northwestern University. He felt it would be nice “to give local people the opportunity to hear speakers they would not otherwise hear.”