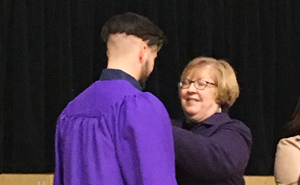 The Dec. 8 event was held on Butler’s El Dorado campus.

Since 1965, hundreds of Butler graduates have received a pin upon graduating with a RN (registered nurse) degree. The pinning practice of nurses began in the late 19th century in London. By 1880, this symbolic rite was brought to Bellevue Hospital in New York City. Since then, the practice has become commonplace at nursing school graduations.

“This pinning demonstrates your effort, dedication and perseverance,” Mills told the graduates.

Joyce emphasized how proud the school was of the graduates and their achievements. All of the graduates either have a job or will continue their schooling. They are going into pediatrics, labor and delivery, ICU and orthopedics. One student will head to Duke University Hospital to work.

“Butler produces nurses that area hospitals are eager to add to their staffs,” Joyce said.

The president of the class, Jana Clendenin, drew laughs out of the crowd when she spoke of how they practiced injecting oranges and how if you don’t document it, it didn’t happen.

(All cities are in Kansas)