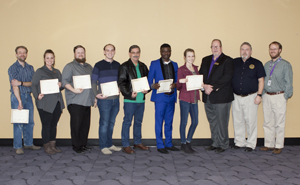 Students from Butler Community College’s IT program received certificates of completion at the bi-annual ceremony given in their honor.

Last week, 13 students were given certificates in the departments of Software Development, Cyber Security, Internetworking Technologies, and Interactive 3D Technologies. These students received certificates of participation indicating completion of their courses.

“The teachers really talk to you one on one,” said Ridgway of Kechi.

Duane Dunn, the associate dean and director of academic and professional programs at Kansas State University, Global Campus was the keynote speaker at the ceremony.

“I want to encourage you not to stop taking classes,” Dunn told the students. “It takes commitment, perseverance and a great deal of interest. What just a few years ago seemed was an impossibility is today standard practice.”The department chair of Interactive, Digital, and 3D Technologies is Darryl N. Runyan and the department chair of Cyber Security and Networking Management is Brett Eisenman. Both of these professors and their staff have worked hard to help the students learn the newest technologies.

IT Graduates and Hometowns:

For more information about our graduation rates, the median debt of students who completed the program, and other important information, please visit our website at, http://documents.butlercc.edu/gainful-employment/Interactive-3D/Gedt.html.

For more information about our graduation rates, the median debt of students who completed the program, and other important information, please visit our website at, http://documents.butlercc.edu/gainful-employment/Cyber-Security/Gedt.html.