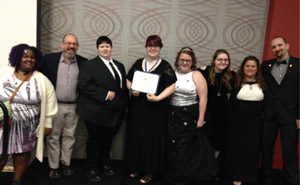 Butler Community College’s chapter was recognized for achieving Five Star Level, which is the highest status internationally. Other awards included:

Students Mariah Baker and Holly Herda and Advisor Chrissy Baker were recognized. Mariah Baker of Augusta received 4th Place in Achievement in Art—Photography as well as