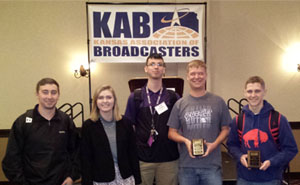 Butler received 11 awards this year, which brings Butler’s total KAB awards to 222 since the competition began.

Twelve students and one faculty sponsor represented Butler at the 2017 Kansas Association of Broadcasters Student Workshop held on April 4 in Topeka.  Student delegations from high schools, and two-year and four-year institutions in Kansas were able to interact with broadcast professionals from the region, compare production skills, and apply for internships and jobs in the area.

Eleven Butler students received 11 awards, including two first place, four second place and five honorable mentions for radio and television-based undergraduate entries. Butler received more awards than any other two-year college in the state.  This brings Butler’s total KAB awards to 222 since the competition began in 1998.  Seventy-nine of the 222 awards given were for first place.

“The workshop is a great opportunity for Butler students to present themselves to industry leaders,” said Keith West, mass communications professor. “Over the years, a number of professional careers got their start from internships and part-time employment facilitated by KAB.”