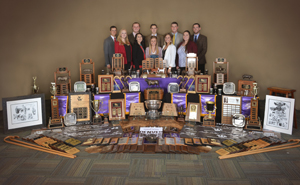 Butler Community College’s Livestock Judging Team was named Team of the Year by the Junior College Coaches Association along with several other honors.

“It’s awesome to have one-third of the All-American Awards. This brings Butler’s total to double that of any other program in the country,” Coach Arnold said. “It’s been an incredible year, and I’ve definitely been blessed not only to have great students but to be here at Butler with great administration and such support for our students and our program."

Five students on Butler’s Livestock Judging Team were named All-Americans. Only 15 students nationwide receive this title. Butler’s recipients of this title include:

Members of the 2016-17 winning Butler Judging Team are:

Butler’s team has won three out of the last four events this season. During the last show in Houston, the team placed 3rd. Along with receiving the title of All-American, Miller and Stark placed High Individual Overall at the Houston Livestock Show and Rodeo Collegiate Livestock Judging Contest in Texas.

Butler Community College’s Livestock Judging Team has been honored as a premier team for more than two decades. The team holds more than 60 champion or reserve-champion finishes at national competitions. Butler has fielded more than 48 All-Americans—more than double the amount of any other community college. This winning tradition is the result of a dedication to hard work and a commitment to excellence. The students in the judging program maintain high academic rigor as well, with at least a 3.7 cumulative GPA.