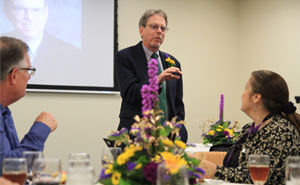 Butler Community College Foundation awarded Dr. Gregory Joyce the 2017 Distinguished Alumnus award at a reception held in his honor on May 11.

“He cares about El Dorado and the surrounding community,” Bellesine said.

One week before receiving Butler’s award, Joyce was honored with the El Dorado High School Alumnus award as well.

“I think it’s really important to give back,” Joyce said. “I don’t do it for recognition.”

Joyce and his wife Helen have supported the Foundation for 27 years. In 2008, they established the Greg and Helen Joyce Scholarship; this scholarship benefits a student majoring in healthcare. Joyce attended Butler in the early 1970s and then went on to the University of Houston, College of Optometry. After becoming a Doctor of Optometry in 1977, Joyce came back to El Dorado to practice with his father.

An active member of Butler Community College GrizzlyBackers, Joyce tries to attend as many college events as he can. The Joyce’s served as captains for the 2003 Butler Benefit Auction, and in 2004 they were co-chairs for the event. The Joyce’s also supported the Grizzly Golf Tournament for many years.

“He is a huge supporter of our students and their success,” said Stacy Cofer, vice president of advancement at the Butler Foundation.

Joyce said he was humbled by the award and thanked the Foundation for the honor. He admitted that he enjoys the recognition but hopes that awards like this will push others to volunteer. Joyce learned from his father. He, in turn, is teaching others.

Along with volunteering for Butler, Joyce is a member of the El Dorado Downtown Kiwanis Club, El Dorado Chamber of Commerce, YMCA of El Dorado, Greater Wichita YMCA, Butler Community College Board of Trustees, Susan B. Allen Memorial Hospital, First United Methodist Church, Gold Key Optometric Society and Red Devil Chefs in El Dorado. He was a Volunteer of the Year for ARC of Kansas in 1995, Kansas Optometrist of the Year: 2007. He won the Butler Servant Leadership Award in 2016.  In 2007, he received the Commerce Community Service Award from Commerce Bank. Joyce also serves on the Educational Facilities Authority committee, which governs the BG Products Veterans Sports Complex.