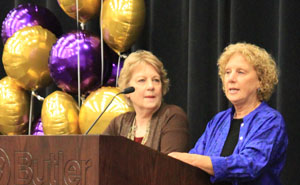 In 1965, Pam and Penny Startz graduated El Dorado High School and applied to become stewardesses. The twins were told to go to nursing school and then to reapply – they were too young to work for an airline.During this time, Butler Community College was launching their nursing program. The twins were two of the first eight students who graduated from the nursing program in 1967. They realized helping people heal was a passion for both of them. “We touch their lives (patients), but they touch our lives,” Pam Startz Perkins said.

Perkins and her sister Penny Startz Nelson became cardiology nurses. The twins, who had flown in from their homes in Texas, were keynote speakers at the college’s 50th anniversary luncheon held on May 11 in honor of the nursing program. Butler staff, students and former students were in attendance. Anita Mills, dean of Health, Education and Public Service, told the audience that more than 3,500 nurses have graduated from Butler - the first nursing program in Kansas to offer an associate’s degree. The sisters told the audience Butler’s nursing program supplied them with a great foundation. “I am so grateful for the fabulous groundwork that was given to me by this nursing program,” Nelson said.

The twins explained to the crowd how caring for the heart has evolved. As technology changed, nurses, like the two of them, needed to reeducate themselves. Because of Butler’s strong academic base, the twins said, they were able to continue learning and keep up with the times. State-of-the-art ultrasound machines, monitors and defibrillators are now standard equipment.

Perkins wrote a book, “The Art of Heart Healing Handbook” and continues to help clients with Healing Touch© Therapy. Nelson turned her focus to horses and uses her caring techniques on animals in need of rescue.