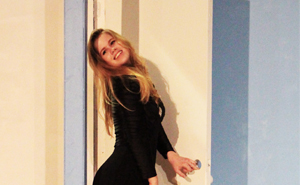 A Fun and Craftily Written Comedy.

Butler Community College’s Theatre Department is kicking off the 2017-2018 school year with a performance of “Twentieth Century,” a classic comedy by Ben Hecht and Charles MacArthur. This adaption by Ken Ludwig features Oscar Jaffe, a pompous Broadway theatre director desperate for a successful new production. Aboard the Twentieth Century Limited, Jaffe encounters his former protégé, a temperamental Hollywood actress, Lily Garland. As the train travels from New York to Chicago, Jaffe stops at nothing to persuade Garland to return to Broadway with him and star in his upcoming production.

Price: $5 for adults and $2 for students and seniors. Butler students get in free with Butler ID.

Other cast members include:

Cutline: Abby Staats of El Dorado poses as Lily Garland on the set of “Twentieth Century.”