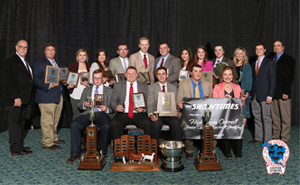 Last year, Butler’s 2016-17 Livestock Judging team was titled Team of the Year by the Junior College Coaches Association and the college had one-third of the All-American Awards nationwide.

The North American International Livestock Exposition (NAILE) is the largest all-breed, purebred livestock event in the world, with 10 livestock divisions and nearly 30,000 entries from the 48 contiguous states — all under one roof.