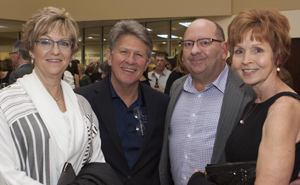 Nearly 350 guests attended Butler Community College Foundation’s 21st Benefit Auction. And because the auction was 21, the extravaganza was modeled after the 21 Club in New York City.

The event raised more than $240,000. The evening featured a silent and live auction, a dice rolling game, a golden ticket drawing and a surf and turf meal. The item netting the greatest revenue was an “Around the World Dinner” hosted by four couples in their homes at Flint Hills National Residences followed by an overnight stay in a lodge. Selling twice, this item netted a total of $11,000.  The high bid of the night was $7,000 for a stay in a Mountain Village Ski Condominium in Telluride, Colo.

Butler’s President Kim Krull, Ph.D., reminded the audience of how much their gifts mean to the students who attend Butler – and how without their generosity, some students would not be able to afford college.

“Thank you for being difference makers,” she said. “You help transform student’s lives with your generous support.”

Sarah-Jane French, a freshman from Virginia, said she would not have come to Butler if it was not for her scholarship. French is on the nationally-ranked Livestock Judging team.

“It’s great to be able to meet the people that help support the school and help us students,” French said. “I wouldn’t have been able to be here without them.”

Along with the one dozen livestock judging students, fine arts students both performed and added ambiance to the event. All the seats were full, and the guests were talking to friends and bidding, knowing how important the money raised will be to students.

“Butler benefits the community and gives educational opportunities to some young people who wouldn’t have had that opportunity,” said Wink Hartman, a Butler supporter.

“We think this is but a small way we can help the college,” said Chambers, president of High Touch Technologies and Butler supporter. “Several of our nephews and nieces have come here, and we appreciate what the college has done.”

“It is such an honor to be here tonight. I truly credit Butler for the woman I am today and for the skills I’ve used to become Miss Kansas,” Fish said. “Butler was where I was mentored and encouraged and was truly allowed to become the person I was meant to be.”

Dylan Walker, a nursing student, told the crowd they are helping him learn to help others through their support. Milana Joslin, a sophomore headed to Wichita State University, expressed her gratitude and told the attendees that the scholarships she was given were the motivational factor for her attending college.

Cutline (L-R) - Debbie and Mike Bellesine, along with Mark and Julie Utech have fun at the Butler Benefit Auction.