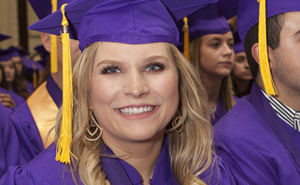 A Butler tradition since 1985, the prestigious Hubbard Award of Excellence is awarded to a student who is exemplary in academic excellence and their involvement on campus and within the community is outstanding as well. The winner receives a scholarship that pays for four semesters to the institution of their choice after graduating from Butler Community College.

“The Hubbard Award of Excellence personifies quality and superiority. We are eternally grateful to the R.D. and Joan Dale Hubbard Foundation and Mr. R.D. Hubbard in particular for investing in our most esteemed transfer scholarship,” Vice President of Advancement Stacy Cofer said.

This year’s recipient is Kaylee Farmer. Farmer of Deerfield, Mo. is thankful that she made the decision to attend Butler after graduating high school.

“I pursued a lot of options to see which college would allow me the most opportunity for personal growth and education success,” Farmer said in her application essay for the award. “In the end, there was no question that Butler was the perfect combination of what I had been searching for.”

The challenges in Farmer’s life ensured her with a toughness and ambition for her future.

“I wanted a career in agriculture,” Farmer said. “My late grandfather actually purchased my FFA jacket for me my freshman year of high school and encouraged me to continue pursuing agriculture.”

The dream of carrying on her grandfather’s legacy and her passion for agriculture is driving Farmer to attend Kansas State University where she will study animal science. Her ultimate goal is to attend law school, specialize in agricultural law, and advocate for agricultural issues while working alongside farmers and ranchers.

“With this career, I know I could truly make a difference by helping improve and preserve the industry for future generations,” Farmer said.

At Butler, Farmer was a member of the national champion Livestock Judging Team, served as Agriculture Ambassadors’ president, participated in Phi Theta Kappa and worked as an intern at BioZyme Incorporated. She was a recipient of several scholarships, and her academics landed her on the Dean’s and Presidential Honor Rolls. 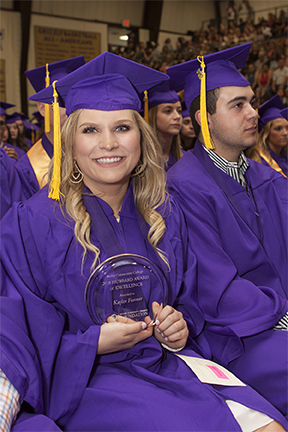 “She is one of the most creative and out-of-the-box thinkers that I have been around,” Frank wrote in his recommendation letter. “Not only is she a well-rounded student from an academic standpoint, but she works hard to leave an impact on the college as well. Kaylee has a sense of leadership that makes her easy to follow.”

Farmer exemplifies what the Hubbard Award of Excellence is about, Cofer said. She excels both in and outside the classroom.

“Part of what has given me the opportunity to be successful academically and otherwise is a network of people I have met along the way that are committed to helping one another,” Farmer said. “Winning the Hubbard Award of Excellence [allows] me to follow my dream of continuing my education.”

In 1985, Butler Community College alumnus R.D. Hubbard (’56) and his wife Joan Dale dedicated the scholarship fund to recognize and encourage academic excellence at Butler. Their Foundation has adopted an entrepreneurial approach to philanthropy that reflects their spirit. Today their primary business interests include a wide range of investments such as land, casinos, and racehorses.