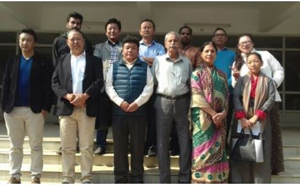 A Butler math instructor was given a high honor

The U.S. Department of State’s Bureau of Educational and Cultural Affairs recently announced the U.S. colleges and universities that produced 2017-2018 Fulbright U.S. Scholars. The Fulbright Program is the U.S. government’s flagship international educational exchange program. Top-producing institutions are highlighted annually in The Chronicle of Higher Education.

Lakshmi Kambampati from Butler was awarded a Fulbright grant for 2017-2018. Kambampati, who teaches part-time at Butler, has a master’s degree from North Eastern Hill University, India and another master’s degree from Newman University. She completed an educational internship at the National Aeronautics and Space Administration (NASA) and attended an international conference for mathematics educators in Japan. Kambampati also trained teachers in Liberia, West Africa as a Peace Corps Response volunteer.

“As an individual, I am filled with pride knowing that my name will forever be linked with one of the most prestigious and selective teaching scholarships the United States has to offer,” Kambampati said. “I love my work. I enjoy getting up every day to see another teacher or another school making an effort to make our world a better place.”

As a part of her Fulbright, Kambampati is teaching Project Based Learning at universities throughout India and Tajikistan. Some of the schools and universities where she will share her expertise are the Upper Tibetan Children’s Village in Dharamsala, India; Banaras Hindu University, Varanasi, India; Central Institute of Higher Tibetan Studies, Varanasi, India; and the University of Central Asia in Dushanbe, Tajikistan.

Since its inception in 1946, the Fulbright Program has provided more than 380,000 participants—chosen for their academic merit and leadership potential — with the opportunity to exchange ideas and contribute to finding solutions to shared international concerns. Over 1,100 U.S. College and university faculty and administrators, professionals, artists, journalists, scientists, lawyers, and independent scholars are awarded Fulbright grants to teach and/or conduct research annually. The Fulbright U.S. Scholar Program operates in over 125 countries throughout the world.

The Fulbright U.S. Scholar Program is a program of the U.S. Department of State, funded by an annual appropriation from the U.S. Congress to the Bureau of Educational and Cultural Affairs, and supported in its implementation by the Institute of International Education’s Council for International Exchange of Scholars.

For more information about the Fulbright Program, visit http://eca.state.gov/fulbright