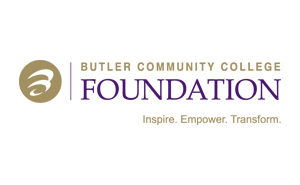 Student and donor success highlighted at the President’s Donor Dinner

Student and donor success was highlighted at the President’s Donor Dinner held on Sept. 6 at Butler Community College. The purpose of the annual event is to thank donors for the many ways their support impacts students and also to recognize those who have reached a new giving level during the past fiscal year ending June 30, 2018. This year, 180 guests attended.

“Butler has opened up so many doors that will directly play into my future,” Nelson said. “I wasn’t supposed to be here…[but] on Dec. 13, 2018 I will be the first college graduate in my family.”

Nelson also thanked donors for their profound impact on students.

“Without donors like you tuition would not be feasible, the positive vibe that engulfs us as students would not be here, and most importantly the ‘non-traditional’ student like myself would not have the opportunity to pursue a lifelong goal.”

Vice President of Advancement Stacy Cofer led the recognition portion of the evening, which included awarding two service awards that are distinct to Butler.

Distinguished Service Award for Directors of the Foundation Board

Sixty-eight donors were recognized for reaching a new annual giving level, ranging from $500+ to $5,000+. Giving totals are calculated based on the prior fiscal year. Lifetime giving recognition accounts for all donations from a donor since the time they first began giving to the college. These donors are recognized starting at the $10,000 level. Giving levels range from $10,000 to $1 million though there are not donors recognized at every level annually.

“Thank you all for making this evening special and for all the ways you change the lives of Butler students,” Cofer said.

Sponsors for the event were Bank of America, The Commerce Bank, INTRUST Bank, and ICI.