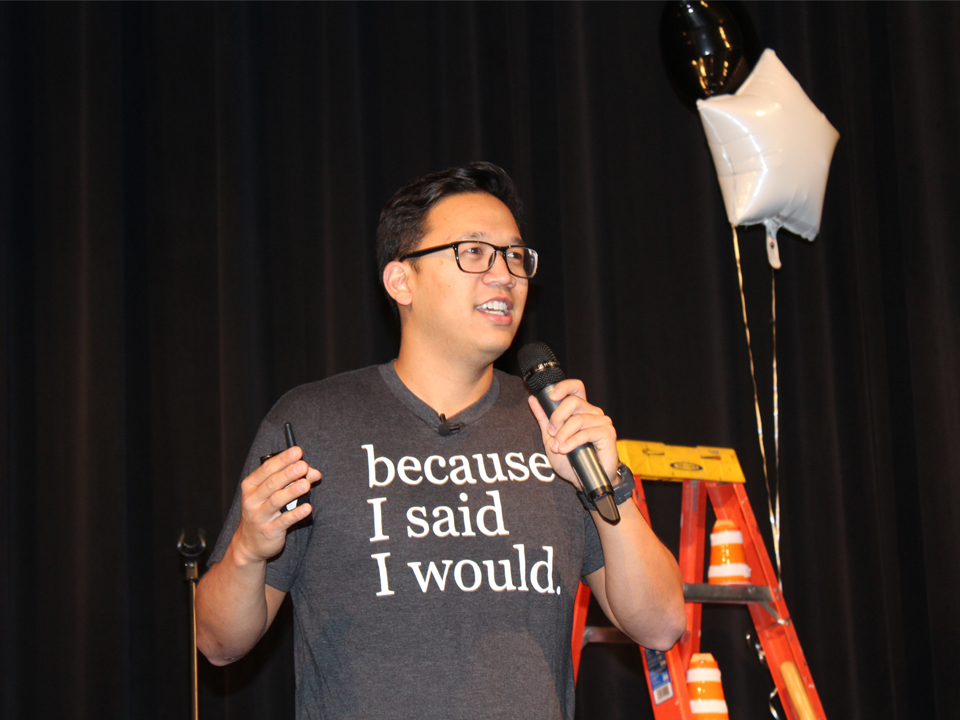 Because I Said I Would Founder Inspires Butler Employees.

Alex Sheen, the founder of because I said I would, gave an empowering presentation to Butler Community College employees on Oct. 9. He focused on the impact of keeping one’s word. Because I said I would is an international social movement and nonprofit organization dedicated to the betterment of humanity through promises made and kept.

Sheen told the Butler staff and faculty audience members inspirational stories of people keeping their word. He spoke of a father writing inspirational notes to his young daughter – knowing the notes would survive longer than he would. He explained how lonely he felt walking across Ohio on his own. Sheen was raising awareness for three women who were kidnapped and abused. That loneliness soon disappeared when he reached his final destination, Cleveland, and hundreds of supporters joined him, including one of the victim’s mothers.

After the death of Sheen’s father, he realized, similar to his father’s legacy, someone’s word might in fact be his/her greatest gift. In 2012, Sheen began to give out cards that read, “because I said I would.” More than 9 million of these promise cards have been handed out worldwide. During the presentation, they were handed out to Butler staff members.

“My father was unnoticeable except for one thing; he kept his word,” Sheen told the rapt audience. “What the world needs is for people to do what they said they would do in the first place.”

Sheen’s work has been featured on CNN, ABC World News, the TODAY Show, Good Morning America, NPR, Fox News and on the CBS nightly news. He is also a four-time TEDx speaker and will publish “because I said I would” in January 2019.

His perspective on accountability and commitment inspired staff and faculty during their annual meeting. Reaching across divides, Sheen explained how a simple promise can change another human’s life.