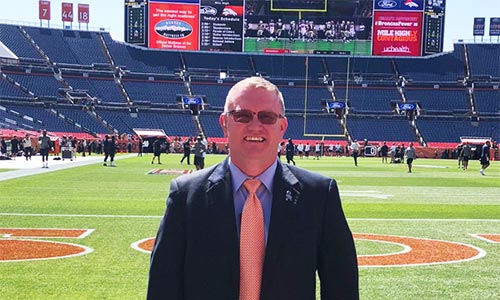 Butler grad, Army Veteran and father of quadruplets, Patrick Tetrick is the Director of Guest Relations for Broncos Stadium at Mile High and the Denver Broncos.  Among multiple roles, he oversees the ushers, ticket takers, concierge desks and wheelchair staff you might encounter at Broncos football games. Aside from football games, approximately 250 other special events are held at the stadium including, but not limited to, concerts, high school football championships and the Denver Outlaws professional lacrosse games. Staying busy, Tetrick manages all the guest relations functions that take place at the stadium. The success Tetrick has earned is a product of his hard work and determination all throughout his life.

Tetrick was born and raised in Wichita, and joined the United States Army after graduating high school in 1985. Following his service in the Army, he was prompted by a friend to go to college. Tetrick took the advice, but at the age of thirty, he was unsure what to study and where to go, so he chose Butler Community College for simplicity.

Butler was convenient for Tetrick because of the class sizes and location. Living in Wichita, it was an easy commute to the Andover campus, and the small class size helped him get the assistance he needed as an adult student.

“It was great, the instructors were very understanding and were extremely helpful with me getting back into the student role,” said Tetrick.

After earning his Associate of Science in Physical Education at Butler, Tetrick had a better idea of what he wanted to pursue, and he decided to further his education at Wichita State University. Transferring to WSU was “super easy because all the classes transferred,” said Tetrick.

In the fall of 2001, Tetrick began his transition to WSU, but his academic plans were put on pause when the Sept. 11 attacks occurred. Tetrick was activated as an army reservist and was ordered overseas for a year.  Following his return, Tetrick resumed his education at WSU. Tetrick, a newlywed with quadruplets on the way, had to balance his full-time classes, full-time job, Army Reserve commitment, and a new internship.

The internship was with Stadium Management Company, the stadium operating arm of the Denver Broncos football club. Tetrick took the 500-mile trek to Colorado to fulfill his internship during the ten home games that occurred each season. This internship lasted two seasons and Tetrick built up great integrity with his executives. Two and a half years after he began at WSU, Tetrick graduated with a bachelor’s in sports management. After college, Tetrick worked several jobs before receiving a call from the Denver Broncos, offering him a job. Without hesitation, Tetrick took the offer and moved his family to Colorado.

Tetrick still works at the stadium and has sons of his own starting to look at colleges. Looking back, Tetrick says he wishes he would have attended college sooner, but he enjoyed it more as an adult.

Tetrick’s advice to students, “Don’t be close minded, be open minded to all opportunities.”

He also stresses the importance of networking, attention to detail, and good grades because that is what got him where he is today.  “The community/junior college route is a very viable option,” said Tetrick.