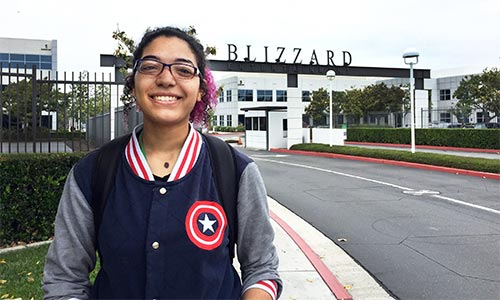 Butler Community College Interactive, Digital & 3D Technology student Jacquelyn (Jacqui) Washington of Wichita has been selected to participate as a digital “level design” intern with Blizzard Entertainment, one of the world’s largest video gaming developers. Known for interactive games such as World of Warcraft, StarCraft, Diablo, Hearthstone, and Overwatch, the company’s online game sites host millions of digital game players from around the world.

“I’m both honored and excited to be selected to intern at Blizzard Entertainment,” said Washington. “I’ve always had a passion for technology, gaming and game development and now I have an opportunity to work side-by-side with some of the most talented people in the industry.”

Washington’s internship began in late May at Blizzard Entertainment headquarters in Irvine, California, and will end just in time for her to begin the 2019 fall semester at Butler.

Brian Foster, professor of Information Technology at Butler is one of Washington’s instructors.

“Though the Interactive 3D tech courses at Butler have given Jacqui the rules and tools for creating interactive games,” said Foster, “what sets Jacqui apart is the exceptionally creative ways she applies what she has learned.”

Foster said that none of Washington’s instructors at Butler are surprised that Washington was selected to be among only a handful of young people chosen from across America to intern at Blizzard Entertainment.

“Blizzard doesn’t look for people who are just academically superior – which, Jacqui is, of course. The company looks for people who are well-rounded, with real-world experience and are multi-talented. And, Jacqui checks all those boxes,” said Foster.

The rapid growth of the interactive gaming industry is, undoubtedly, one key reason why Butler chose to be the first college in the area to offer its specifically focused Interactive Digital & 3D Technology education track. In 2018, the video gaming industry generated just shy of $135 billion and continues to grow 10 percent annually, according to GamesIndustry.biz. That makes computer gaming development one of the fastest growing Information Technology careers in America, and Butler offers young people like Jacqui a way to enter that career path.

Asked how she decided to pursue a career in game-development, Washington said the decision was the outgrowth of a life-long journey that started before she was even in kindergarten.

“As soon as I could reach the keyboard on my parents’ computer, they let me play games that taught me the alphabet and basic math. Learning to use a computer was just naturally part of the process. And, as I got older, my cousin would pass down ever-more complex and challenging games as he grew tired of them.”

When she received a PlayStation Portable (PSP) for her 12th birthday, Washington’s enthusiasm for interactive digital games really took off.

“I liked the life-simulating (sim) games best because they allowed me to create my own female characters and their environments; and then identify with those characters as they jumped chasms, defeated monsters and did fantastic things to save the world,” Jacqui said proudly.

Jacqui explained that, at the time, it didn’t occur to her that customizing games was anything more than just having fun. “To me, personalizing characters and creating their environments was just a great way to have fun. I didn’t realize I was learning computer programming at the time. But, looking back, that’s exactly what I was doing.”

As her sophistication grew, so did her ambition to have even more control over gaming environments.

“The Interactive, Digital & 3D educational track at Butler has given me a chance to become proficient with some of the industry’s most sophisticated programming software,” said Washington.

The internship in Irvine, Calif., is especially exciting, said Washington, because Blizzard Entertainment’s core values are identical to her own. “The Blizzard values ‘learn and grow’ are identical to values I’ve embraced myself. And the company implements those values through Blizzard Academy, an ongoing industry-specific internal university that allows every member of the team to constantly learn and advance as the industry learns and advances,” explained Washington.

During her internship at Blizzard Entertainment, Washington expects to be able to further hone her skills in 3D Level Design, Combat Design, Terrain Sculpting and more.

Being born on the cusp of the 21st century, Washington’s generation has been immersed virtually since birth in a world of technological advancement that is unprecedented. Buckminster Fuller observed that human knowledge doubled between 1900 and 1950, doubled again by 1975, and continues to double at an ever-faster pace. Jacqui and her peers are embracing a world that is currently doubling human knowledge faster than ever.

Just as the Gutenberg Bible spread knowledge and spawned careers in typesetting and printing, every newly developed software program is spreading knowledge and spawning jobs that weren’t conceived of just a few years ago. It wasn’t too long ago that a career designing massive multiplayer online role-playing games wasn’t even in our vocabulary; and now, it’s one of the fastest growing careers in the information technology field.