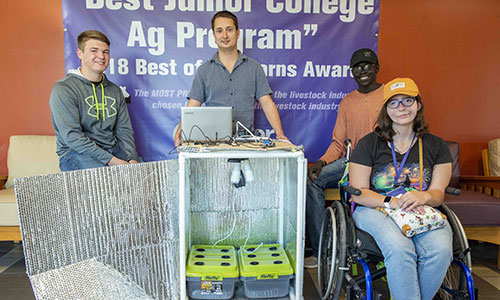 El Dorado, Kansas – Butler Community College assistant professor of agriculture Derek Foust has built what he calls a “personal food computer.” The size of a small refrigerator, the enclosed 24-inch by 24-inch square by 36-inch-tall box will contain lettuce and other small leafy greens and herbs that receive light from several grow-lights in the top of the device. The plants are suspended in containers of nutrient-rich water and the walls of the chamber are covered with reflective material designed to multiply the efficiency of light emanating from the grow-lights.

The food computer applies the science of hydroponics, the method of growing plants without soil.

“Essentially it is a hydroponics food-growing chamber that is connected to a small computer,” said Foust. “In addition to a web cam mounted inside to chart the plants’ daily growth, sensors will measure various parameters such as light intensity, temperature and humidity. We will manually measure the pH and nutrient levels and, on a regular basis, all of the data will be uploaded into the project’s data cloud.”

Foust emphasized that though the food computer is physically located in the Butler agriculture department building in El Dorado, Kansas, it is one of dozens of similar food computers across 62 countries around the world that will collect plant-growth and environmental data. The “data cloud” is managed by MIT and will be available to other project participants for analysis; just as other participants’ data will be available to Butler students.

Asked the project’s purpose, Foust explained the Butler agriculture department’s goal is to expose each ag-track student to the latest developments in the agricultural sciences.

“We knew creating a food computer and participating in an open-source, networked, data-collection experiment would be an ideal learning opportunity for teaching students about the basics of research and the intersection of computer science with plant science,” explained Foust. “However, when we first investigated the Massachusetts Institute of Technology (MIT) Open Agriculture (OpenAg) Initiative, it was geared toward larger research institutions and required a good deal of engineering and software knowledge,” Foust continued.

Foust noted that because the project encouraged discussion among participants through an online forum, it became immediately apparent that there was need for a less expensive, more user-friendly food computer design.

“As a result of online discussions,” said Foust, “the Open Ag Community worked together to create a design for a food computer that could be built for under $300 and required relatively little technical expertise.”

The greatly simplified food computer design is referred to as the “Minimum Viable Product Food Computer” or, the “MVP Food Computer.” The less technically challenging design has not only expanded the range of students, laymen gardeners and others who can participate in the experiment, explained Foust, but the increased number of participating food computers will also increase the amount of raw data that will be available for analysis.

According to Foust, the MIT OpenAg Initiative was born out of a growing realization among scientists around the world that current industrialized farming practices have substituted taste and nutrition for an easy-to-harvest, shippable product.

“One of the most exciting aspects of Butler students getting involved in this open source food computer experiment,” Foust said, “is that it’s not cut and dried; it’s designed to let participants tinker with the process, produce different outcomes and, then, compare notes with other participants’ data.”

The open source collaborative concept, Foust explained, is recognized as one of the most productive research methods in science because it allows large numbers of participants to work on the same project from anywhere in the world.

“This project will not only allow Butler ag-track students to participate in a ground-breaking scientific experiment,” Foust explained, “but, do so with people from around the world, across language barriers and across technical skill levels at the same time.”